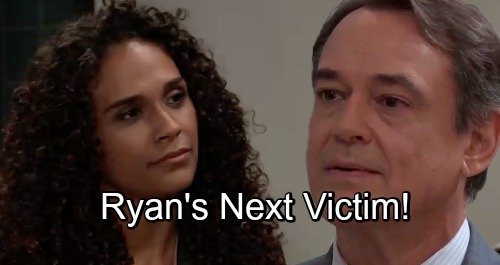 General Hospital (GH) spoilers tease that Ryan (Jon Lindstrom) will find some new victims. Mary Pat (Patricia Bethune) faced a grim end since she was in Ryan’s way, but he’ll have other motives for his next murders. There are plenty of reasons for Ryan to form a plan and take deadly action.

Hayley Erin will be leaving the role of Kiki soon, so many GH fans expect her to be killed off. It makes sense when you consider all the hints General Hospital’s been dropping. Ava (Maura West) and Ryan’s link seemingly seals Kiki’s fate, so that’s a lethal exit we’ll all be dreading.

However, there’s someone else Ryan will get dangerously close to. It turns out Jordan (Briana Nicole Henry) could be in real trouble. On November 15, “Kevin” will tighten his grip and pull Jordan into his mess.

Of course, the opportunity may be handed to Ryan. Anna (Finola Hughes) mentioned she was going to get some help for Jordan, so “Kevin” may be the character she asks. After all, Kevin has experience dealing with a murderous brother. Anna and Jordan may think he’d be the perfect person to weigh in, but they don’t know the wrong twin’s in Port Charles.

During a chat with Peter (Wes Ramsey), Lulu (Emme Rylan) worried her articles had sparked a Ryan copycat. Jordan may assume that as well. She might think “Kevin” can help her figure out the new murderer’s mindset and prevent another deadly attack.

Unfortunately, the new killer is actually the old one. Ryan may be manipulating Jordan through every step of the investigation! He loves to take risks and see how much he can get by with. Jordan tends to be pretty smart though, so what happens if she catches on? She could find herself in extreme peril as this story moves forward.

Since Henry hasn’t even been in the role that long, Jordan will probably survive Ryan’s reign of terror. Still, that doesn’t mean she’ll escape unscathed. General Hospital may want to throw a near death or two in the mix. Ryan doesn’t have to actually kill every victim. There may be ones who simply have life-threatening injuries and pull through.