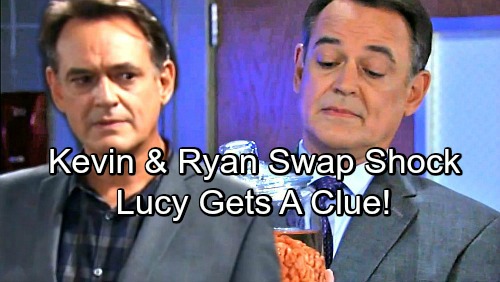 General Hospital (GH) spoilers tease that some major revelations will stun Port Charles. A mystery’s been heating up at Ferncliff, so we’ve already been given a few crucial clues. Let’s think about what we know so far. Carly’s (Laura Wright) stuck next to a male patient who’s been rather noisy. He keeps yelling and knocking out Morse code through the wall.

Carly turned to an app on her phone to help her decipher the message. He insisted that he’s being held against his will, which left Carly a bit confused. Her response was simply, “Aren’t we all?!” Carly certainly doesn’t want to be locked up in there either. She knocked back that she can’t help him, but she’ll remain curious about her unknown neighbor.

Now that Kevin’s (Jon Lindstrom) treating Carly at Ferncliff, fans can’t help but feel like something’s off. Kevin’s involvement alone is suspicious. General Hospital could’ve cast some random day player to be Carly’s doctor. Instead, they specifically chose Kevin. He’s already busy with patients at GH, so there must be a reason the show wanted him on Carly’s case as well.

Of course, Kevin was quick to stop Jason (Steve Burton) from investigating. He even made sure Jason got fired, presumably to protect some secrets. Kevin also discouraged Carly from learning more about the person on the other side of that wall. Bottom line, Kevin’s hiding something and it has to be huge!

There’s a good chance Kevin isn’t actually Kevin. His strange behavior has led to speculation that he may be Kevin’s twin, Ryan. General Hospital viewers know Ryan has posed as Kevin before, so he might be back at it. The real Kevin could be the one who’s held hostage and desperate for assistance. His cryptography background could tie in here since the patient knows Morse code.

Mary Pat (Patricia Bethune) gave the patient next door plenty of drugs to quiet him down. We couldn’t see the man’s face, but Mary Pat knows exactly who it is. Does that mean she’s in on Ryan’s scheme or has he simply fooled her, too? The former makes the most sense. Mary Pat is just as determined to keep Carly away from the mystery man, so she may be Ryan’s secret helper.

Ryan and Mary Pat have managed to keep everything under wraps so far. However, it’s just a matter of time until things fall apart. General Hospital spoilers say the trouble could start with Lucy’s (Lynn Herring) suspicions. After an encounter with Kevin, she’ll note that he just doesn’t seem like himself.

Sooner or later, PC residents should learn the truth behind Kevin’s personality shift. It could take a while, but Kevin will be rescued eventually. Let’s hope Carly can figure this out and offer some support in the meantime! We’ll give you updates as other GH news comes in. Stay tuned to the ABC soap and don’t forget to check CDL often for the latest General Hospital spoilers, updates and news.