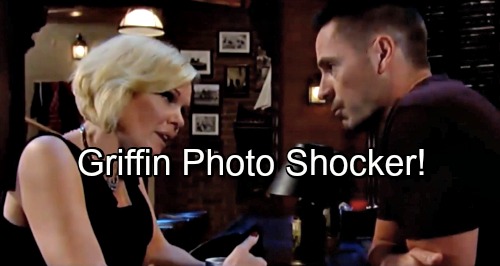 General Hospital (GH) spoilers tease that a dangerous secret is on the verge of exposure. GH fans know that Griffin (Matt Cohen) and Kiki (Haley Erin) had a tipsy one-night stand. They regret their actions and have been trying to move on, but Dr. Bensch (James DePaiva) could blow that plan for them.

Of course, Scott’s (Kin Shriner) involvement complicates the situation. He agreed to represent Dr. Bensch, but only because he intends to throw the case. General Hospital spoilers say an oblivious Bensch will hand over shocking evidence. He’ll feel confident that Scott can make this work to their advantage.

Naturally, the proof is that photo of Griffin and Kiki. Dr. Bensch snapped a pic of them in a close moment, so he’ll think Scotty can play up that angle. He’ll want to create doubts about Kiki’s accusations and suggest that she’s affectionate with all the male doctors. Dr. Bensch will trust Scott to discredit Kiki and score a win in court.

Since Scotty plans on tanking this thing, he’ll be in a tight spot. Dr. Bensch expects him to present this evidence, so Scott may have to do it. He doesn’t want to get himself thrown off the case. However, Scott can at least bend the rules and try to give Alexis (Nancy Lee Grahn) the upper hand.

Franco’s in on this sabotage plot, so Scott will let him know what’s up. He’ll admit there’s a picture of Kiki and Griffin that could cause some trouble. General Hospital spoilers say Scott will urge Franco to pass the news along.

Franco will do as he’s told, which means Alexis will find out about the bombshell. She’ll immediately confront Kiki and wonder why she left out this potentially scandalous tidbit. Kiki will think fast and assure Alexis it was nothing. That’s sort of true since it was merely a moment of comfort between friends. The real secret is the hookup Kiki’s hiding!

Alexis will reiterate that she doesn’t want any other surprises. Kiki has to be honest if she wants a real shot at a victory. Nevertheless, it looks like Kiki will keep her mouth shut. She won’t want to risk blowing the lawsuit and bringing on Ava’s (Maura West) wrath.

Kiki will face another hurdle when Franco blabs to Ava. He’ll tell her mom about the photo and undoubtedly stir up suspicions again. Kiki will likely smooth things over, but for how long?

Something tells us a courtroom shocker will be unleashed! We’ll give you updates as other GH details emerge. Stick with the ABC soap and don’t forget to check CDL often for the latest General Hospital spoilers, updates and news.