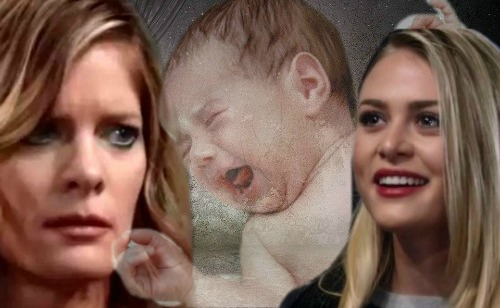 General Hospital (GH) spoilers reveal that there are currently two contenders in the daughter hunt. Nina’s (Michelle Stafford) got a long-lost child out there, but is it Sasha (Sofia Mattsson) or Kiki (Hayley Erin)? There’s a chance it could even be someone else, but let’s consider these crucial candidates for now.

Curtis’ (Donnell Turner) search has led him in Sasha’s direction, so Valentin’s (James Patrick Stuart) got high hopes for this girl. Once the DNA test results come in, they expect to know one way or the other. However, General Hospital has been dropping some serious anvils about Kiki lately. Her feud with Ava (Maura West) has really spiraled out of control.

Ava declared that Kiki isn’t her daughter anymore, so that seems like a clear hint! Nina also decided to insert herself in the drama. She argued that she wouldn’t waste a moment fighting if she had a child. GH will keep fans waiting and wondering about the truth, but one thing’s for sure. That heart pendant is bound to come into play.

If any DNA test results get manipulated throughout this process, the other heart half could help clarify things. Nina’s determined to find the missing piece, but who has it? Where will it turn up? General Hospital could easily take advantage of the heartache Kiki’s dealing with. She put on a brave face around Griffin (Matt Cohen), but she must be hurting deep down.

Since Ava and Kiki feel like their bond has been irreparably severed, maybe Kiki could come to collect any lingering items at her mom’s penthouse. She’s bound to have some stuff she left behind during visits. Ava might allow it and suggest that it’s “goodbye and good riddance” after that. She might’ve forgotten about the significant pendant lurking in some old belongings.

It’s easy to visualize an emotional Kiki rummaging alone. She might stumble across this shocker without even knowing what it is. Imagine Nina’s surprise if Kiki wears it on a whim! There’s no guarantee that Kiki will truly turn out to be Nina’s kid, but the possibility could leave them both reeling.