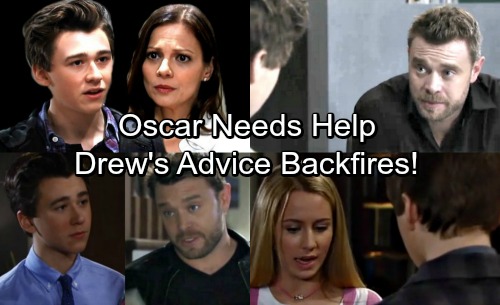 General Hospital (GH) spoilers tease that Oscar (Garren Stitt) will find himself in a bind. He’ll run into some difficulties, but it looks like he’ll want to leave Kim (Tamara Braun) out of the loop. Maybe it’ll be involve some “guy stuff” that he’d rather not talk to his mom about. Oscar may think he needs the male perspective for this particular issue.

Fortunately, Oscar now has a father he can turn to. He was hesitant to accept Drew (Billy Miller) in his life at first, but he’s quickly warming up to him. Drew’s anxious to learn more about his son as well. He can tell that Oscar’s a good kid. Drew feels guilty about missing out on all those years. He knows Oscar must’ve struggled through some tricky situations.

That’s why he’ll jump at the chance to pitch in with this one. Drew will be taken aback when Oscar asks for advice, but he’ll certainly appreciate the progress. It’ll be a real father-son bonding moment. GH fans should enjoy watching Drew and Oscar connect. 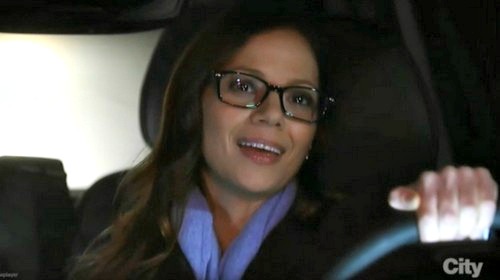 Things have going just fine between Oscar and Josslyn (Eden McCoy), but they’re bound to hit a bump in the road sooner or later. It’s possible Oscar will do something to rile Josslyn. He may wonder if Drew can help him fix it.

Then again, Oscar might face the opposite problem. Perhaps his relationship is going a bit too well! Oscar would never push Josslyn to take this to the next level before she’s ready. However, he may have questions about when that day ultimately arrives.

Of course, Oscar could also just be fed up with Kim or have some new family fatigue. He’s been pretty overwhelmed over the last few weeks. Regardless, General Hospital spoilers say Drew will do his best to offer solid guidance. He’ll probably want Oscar to know that his door is always open. If Oscar needs assistance, Drew’s always going to give it if he can.

Later, Kim will find out something that leaves her livid. Will Drew’s advice backfire? He’s new at this whole dad-to-a-teen thing. Drew might inadvertently lead Oscar down the wrong path, or at least a path of which Kim disapproves. If so, Kim’s sure to rip into him.

It sounds like Drew will continue to struggle. We’ll give you updates as other GH news comes in. Stick with the ABC soap and don’t forget to check CDL often for the latest General Hospital spoilers, updates and news.