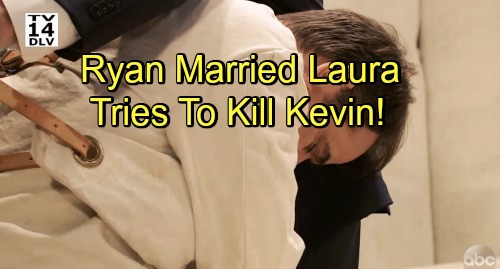 A recent GH episode revealed that the mystery patient at Ferncliff who was trying to communicate with Carly Corinthos (Laura Wright) by Morse Code was Ryan. Other General Hospital spoilers have teased that the proof of it being Kevin was that Kevin has a hobby of cryptography, meaning the solving of codes and cyphers.

Since “Kevin” recently returned from a trip overseas to visit Laura Collins (Genie Wright) and GH spoilers say that she will soon be returning to Port Charles, Ryan may feel that it would be in his best interest to eliminate his twin permanently.

Longtime General Hospital viewers will remember that in the past, Ryan impersonated Kevin expertly, but that was to friends, not to a spouse, although Kevin was dating Lucy Coe (Lynn Herring) during that time period. Ryan may feel impersonating his brother in a marriage may be a little too difficult – unless, of course, Ryan was already impersonating Kevin when he married Laura!

Carly may be in danger too, having told who she believed to be Kevin that she “hallucinated” him as a patient passing by him in a hall at Ferncliff, and Ryan may want to make sure she tells no one else about this. That may have been his real reason to try to convince Carly to stay in therapy with him recently; either to brainwash her or possibly give her a drug that will cause her not to remember what she saw and heard in Ferncliff.

Of course, if those methods did not work (or if she has mentioned this “hallucination” to someone else and Ryan found out about it) she may be in greater danger than being brainwashed or drugged! The other person or persons would be in danger from Ryan as well.

In addition to being in danger from Ryan, it’s also possible that Dr. Lasaris (Casey Biggs) and Nurse Mary Pat (Patricia Bethune) may decide that “Dr. Collins’” treatment protocol may not be sufficient for this dangerous patient.

This deadly duo may not know that he really is Kevin Collins and not his twin Ryan Chamberlain, and subject him to dangerous, unproven medical procedures. It wouldn’t be the first time the two co-opted the treatment of another doctor’s patient.

General Hospital promises many twists and turns in this major storyline which no doubt will include the return of Genie Francis as Laura: stay tuned to GH and keep reading General Hospital spoilers to see what happens next in this exciting mystery!