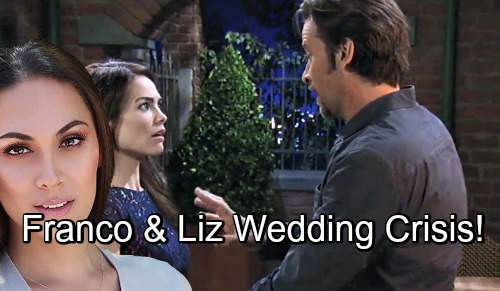 General Hospital (GH) spoilers tease that Franco (Roger Howarth) and Liz (Rebecca Herbst) will get excited about their upcoming nuptials. Their last wedding turned into a total disaster – literally! That earthquake made a real mess of things, but Liz and Franco are anxious to do it right this time. They’re hoping that nothing will stand in the way of their big day.

Unfortunately, there will indeed be some hurdles to overcome. Before Franco and Liz can say “I do,” they’ll be hit with a few surprises. These two will have to work together if they want to tackle the drama. Cameron’s (William Lipton) rebellious behavior will continue to be a problem. Now that he’s an unruly teen, it’s clear that Cam’s got some issues with Franco.

Franco will work hard to get Cameron back on his side. He loves Liz and her boys with all his heart, so he’ll want everyone on “Team Friz” before their wedding kicks off. The nuptials are set to happen this November, which means Franco’s got some time to make it happen. Of course, Liz will do her part as well. She’ll hope to give Cameron the attention he deserves and hopefully settle her son down.

However, that won’t be the only pre-wedding stumbling block. General Hospital spoilers state that another dilemma will emerge for their family. Could it involve Liz’s friend, Terry (Cassandra James)? GH brought her into the picture for a reason. They came up with a new backstory for Liz just to introduce Terry and put them in each other’s orbit. That has to mean something.

Terry had motherhood on her mind during her last chat with Liz. It’s possible she was simply trying to provide guidance, but it could also be a hint. Many GH fans think Terry will need a surrogate eventually, so Liz might be an option. That’s something that could shake up the family and bring some opposing viewpoints. Liz probably wouldn’t want to do it unless Franco and her own kids got on board.

Then again, there could be some other crisis that strikes. If some of Liz’s family members come to Port Charles after all, that could stir up trouble. Regardless, Liz will face some tough choices before she dons her bridal gown. She’ll have to handle some real curveballs, but don’t bet against “Friz.” They always seem to persevere, so their wedding plans should press on.