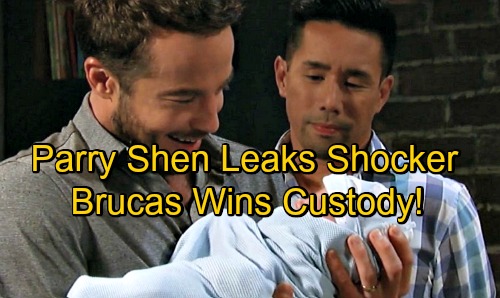 General Hospital (GH) spoilers tease that some birth mom bombshells are on the way. Lucas (Ryan Carnes) and Brad (Parry Shen) were crushed when they found out their son could be taken away from them. They always knew it was a possibility, but facing the reality of it was still difficult.

Of course, things were extra tough for Brad. He’s been battling major guilt since this baby is Jonah, not Wiley. Fortunately, Brad will manage to keep his secret a little longer. Thanks to Julian (William deVry), a stunning twist will leave Brad relieved and Lucas overjoyed.

General Hospital spoilers state that the birth mom will be a no-show at the custody hearing. Instead, Diane (Carolyn Hennesy) will speak on her behalf. She’ll have a big announcement to make, so Brad and Lucas will certainly be intrigued. They’ll just hope they’re going to get a lucky break for once.

Diane will admit that the birth mother changed her mind again. She decided that Brad and Lucas should be this kid’s parents after all. Naturally, Brad will wonder how Julian pulled this off. In an interview with Soap Opera Digest, Parry Shen discussed Brad’s thoughts on the matter. “Brad isn’t naïve enough in this instance to believe in coincidences and luck,” Shen said.

Brad also knows how Julian operates. He’ll assume money was exchanged or threats were delivered, but he won’t really care. “And as long as no one got hurt, Brad doesn’t want to know the specifics,” Shen admitted. However, Brad will worry that this move could come back to haunt him. This is some shady business, so there’s always a chance it’ll cause trouble.

Shen noted that “everything at this point is a triage situation with him juggling and putting out fires left and right.” General Hospital spoilers say Brad will definitely face more problems, but he’ll try to enjoy this victory for now. He’ll even push for Julian to be included in the upcoming celebration.

Lucas could get a bit suspicious, but he’ll probably be happy enough to let it go. Too bad Lucas is destined to get terrible news! Sooner or later, Michael’s (Chad Duell) going to learn the truth and want his child back. This GH mess will only get messier in the coming months.