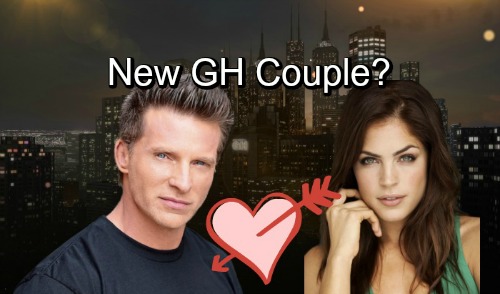 General Hospital (GH) spoilers reveal that Jason’s (Steve Burton) in desperate need of some love. He certainly has feelings for Sam (Kelly Monaco) and she’s got feelings for him, too. Many GH fans have a special spot in their hearts for the “JaSam” connection.

However, General Hospital hasn’t been eager to capitalize on this classic love story. For whatever reason, they just can’t pull the trigger on a real Jason and Sam reunion. If they’re not going to let them get back together, they might as well let them move on separately. There’s no point in leaving these two in romantic limbo.

Sam could use a new love interest as well, but let’s focus on Jason for now. The poor guy has to be lonely! Jason fought so hard to get back to his family, but he didn’t get what he expected when he returned. Sam was with Drew (Billy Miller), who believed he was Jason. That led to the twin mystery and plenty of drama.

The real Jason endured harsh treatment from his brother, but he handled it with class for the most part. Jason’s got a good heart, so he deserves to give it to someone who’ll love him back. Sam apparently can’t commit. She ultimately divorced Drew, but she just won’t go all in with Jason again.

If Jason’s going to move on, who should he be with? There’s no shortage of lovely ladies in Port Charles to choose from. Some General Hospital viewers are rooting for one option in particular. Since Kelly Thiebaud is headed back to GH, perhaps Britt would be a nice match for Jason. They’d look awfully cute together!

On social media, fans have been tossing around the idea and considering what their ship name would be. “BraSon,” “BritSon,” “BaSon,” and “Britton” have all been in the running. We’d give our vote to “BritSon,” but there’s still time to sort out the smoosh details!

Even if GH doesn’t want Britt and Jason as a real couple, they could always hook up. It’s been far too long since Jason hit the sheets, so he needs to let loose and have some fun. Britt might be down for a one-night stand with the blue-eyed hunk.