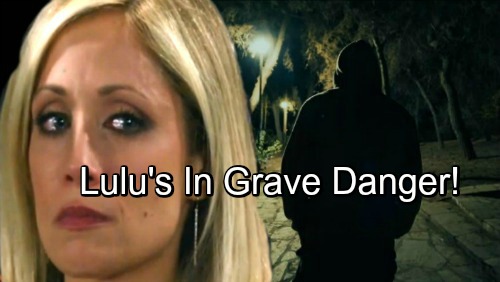 General Hospital (GH) spoilers tease that Lulu Falconeri’s (Emme Rylan) hot scoop could put her in grave danger. Lulu claims she just wants to get Heinrik’s side of the story, which is fine by Peter August (Wes Ramsey). He can see that Lulu’s willing to give Heinrik the benefit of the doubt. Peter recently suggested that Lulu’s compassion is what makes her a good reporter, so he has high hopes.

However, Lulu’s the kind of gal who always has to dig deeper. If her mission exposes dangerous secrets, she could be in real trouble! Lulu plans to draw Heinrik out of hiding and interview him in person. Peter and Valentin Cassadine (James Patrick Stuart) could easily hire someone to play the part. After all, Peter let Jason Morgan (Steve Burton) find a fake picture in Switzerland. 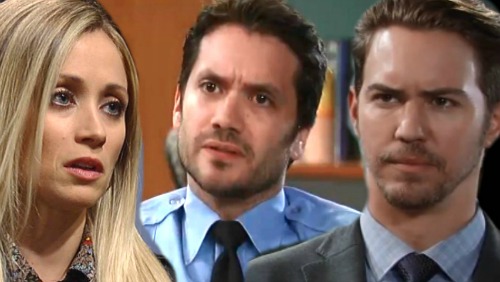 For the next phase of this GH plot, Peter may train some guy to answer Lulu’s questions and help everyone see his perspective. Unfortunately, Lulu tends to get herself in tight spots. Stavros Cassadine (Robert Kelker-Kelly) nearly turned Lulu into his ice princess five years ago. Lulu even glued her hand to her hair in 2009, so she’s obviously prone to getting stuck in jams.

It seems Lulu could find herself in another predicament soon enough. Lulu may not be content with a simple interview. She’ll probably want to find out more about Heinrik and what his current life looks like. General Hospital spoilers hint that Lulu will inevitably cross the line as usual.

General Hospital spoilers say that once Lulu goes too far, she will become a real threat to Peter as well as Valentin. They’re in this together, for better or for worse. If Peter goes down, Valentin will also pay the price. That’s the whole point of cooking up this scheme to satisfy Lulu. These two want to save themselves from exposure, but their plan could backfire. Lulu may learn Peter is Heinrik and uncover details about his Valentin partnership.

Will Lulu end up with a target on her back? She’s keeping Dante Falconeri (Dominic Zamprogna) out of the loop, but will he figure out what’s up and save her? Could Jason (Steve Burton) help Lulu out instead? We’ll give you updates as other General Hospital news comes in. Stay tuned to ABC’s GH and don’t forget to check CDL often for the latest General Hospital spoilers, updates and news.