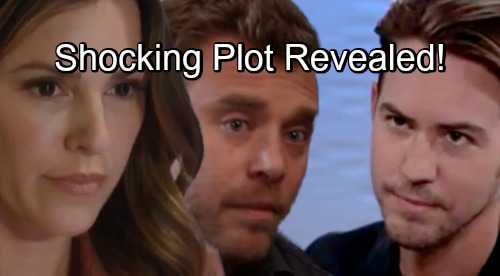 General Hospital spoilers claim that there is an important GH character on the canvas that is loaded with mystery and hidden connections to other central characters in Port Charles. It’s obvious that Margaux (Elizabeth Hendrickson) knows a lot more about Drew (Billy Miller) than she says.

Margaux has the flash drive with Drew’s memory. Margaux claims to be after Sonny and Jason. General Hospital fans can see that Margaux’s real interest is Drew, but why?

The animosity between Peter (Wes Ramsey) and Margaux is palpable. Margaux hates Peter and wants him in jail. Margaux also can’t put Peter there. Today Margaux even pointed out that Peter was just like his father. Odd considering she didn’t know his father, or did she? Kim (Tamara Braun) has also said that Margaux looks familiar.

Maybe Margaux was Kim’s friend that dated Drew. Margaux does protest too much on that point. Faison (Anders Hove) said Drew knew more about Heinrich (Wes Ramsey) than he realizes. Could Margaux, Kim, and Peter all be tied up in Drew’s past? Could they all have knowledge of how the brain mapping took place?

Margaux Isn’t Forthcoming About The Flashdrive

Margaux has possessed the flash drive with Drew’s memory for some time now. Margaux knows that Drew would like to have his memory back. Margaux also claims to be a law-abiding citizen. Why would Margaux not give Drew the flash drive to restore his memory? Could Margaux and Drew have been an item in the past? Maybe Margaux is trying to rekindle their romance before giving him the drive.

Could Margaux have urged Drew to go along with this procedure? Maybe she doesn’t want Drew to remember that. Maybe Margaux worked for Faison or Helena (Constance Towers) and helped find Drew. Could Margaux be Oscar’s (Garrin Stitt) real mother?

Margaux Past Doesn’t Add Up

Curtis (Donnell Turner) is a P.I. and can’t find anything that isn’t on the internet. Drew said all the information Curtis got was easily found. Obviously, Drew could have found this out himself. Has Margaux hidden her past that well? Does Margaux simply have a past that disappeared?

Effective criminals have a way of making things go away on soaps. Maybe Helena or Faison covered up Margaux’s past to use her in the future. Drew didn’t catch Margaux’s family name, but Jason (Steve Burton) would have. Margaux’s maiden name is the same as an old enemy of Sonny (Maurice Benard) and Jason. Is it coincidence or something more?

Margaux, being a lawyer, was entrusted by Drew with his cash interests. Drew willingly meets with Faison, disappearing in summer 2012. Was the plan to take over Jason’s life and money until Ava (Maura West) derailed that. Margaux, thinking Drew was dead, comes to town when Jason Morgan turns up alive.

General Hospital buzz has suggested that Drew may have willingly joined in this plot. Drew always appeared to have such unnecessary animosity toward Jason, is this why? Could Drew turn out to be a bad seed once his past is revealed?