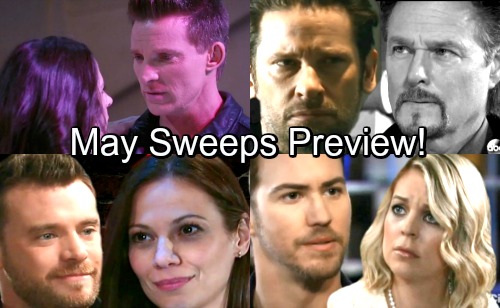 General Hospital (GH) spoilers tease that Port Charles residents will face some serious shockers. May sweeps is rapidly approaching, so expect several storylines to heat up. We’ve got a preview of all the hot action. Take a look at what GH has in store for viewers next month.

For starters, Franco (Roger Howarth) will track down the other victims of Jim Harvey’s (Greg Evigan) abuse. That’ll bring more pain for as Franco reflects on his ordeal and listens to the pain of others. However, Franco will take some huge steps forward toward his bright future with Liz (Rebecca Herbst).

Other General Hospital spoilers say Kiki’s (Haley Erin) misery will get even worse. Dr. Bensch (James DePaiva) will make incredibly obvious that he’s holding a grudge. He’ll chew Kiki out every chance he gets, so she won’t know how much more she can take. Kiki had better be careful though. Dr. Bensch may have a plot waiting if she tries to turn him into Monica (Leslie Charleson).

Meanwhile, Lulu (Emme Rylan) and Jason (Steve Burton) will become allies. They’ll hope they can help each other with the Heinrik investigation. Lulu’s working on an article and she knows Heinrik wants to tell his side of the story. Peter’s been sending the messages, but Valentin (James Patrick Stuart) may have someone step in if this actually gets to the interview stage.

Whatever the case, Peter won’t be too worried about Jason and Lulu closing in on him. He thinks he’s pretty smooth! Peter would rather worry about spending time with Maxie (Kristen Storms). Speaking of Maxie, she’ll grow much closer to Peter as he continues to keep crucial secrets. Will they share a May sweeps kiss? It seems likely based on the way things are going with these two.

Later, Anna will shock Jason. She may be forced to confess that she’s Heinrik’s mother. It might be her only shot at convincing Jason to go easy on his enemy. Over with Curtis (Donnell Turner), he’ll find some surprising evidence. Nina (Michelle Stafford) may find proof that Peter isn’t the kinda guy that Maxie thinks he is.

Elsewhere, General Hospital spoilers say Sonny (Maurice Benard) will fear for Carly (Laura Wright). He’ll suspect that she’s going really off her rocker, so some tough choices may have to be made. Speaking of tough choices, Sonny will also have to pick between Mike (Max Gai) and Avery (Ava and Grace Scarola). Ava (Maura West) will force a custody battle, so Sonny had better be prepared.

Nelle will also do plenty of scheming, but some curveballs could be headed her way eventually. Drew (Billy Miller) will also drift toward Kim (Tamara Braun) while Sam (Kelly Monaco) continues falling for Jason (Steve Burton). GH fans won’t want to miss the sexy moments.

It sounds like May sweeps will pack in loads of excitement. We’ll give you updates as other GH news comes in. Stay tuned to the ABC soap and don’t forget to check CDL often for the latest General Hospital spoilers, updates and news.