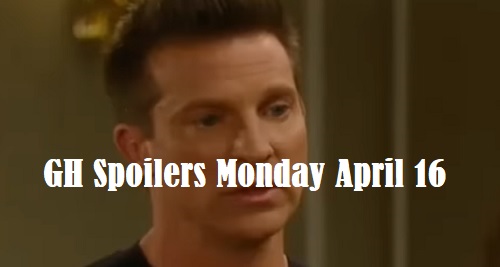 General Hospital (GH) spoilers for Monday, April 16, tease that Anna (Finola Hughes) and Robert (Tristan Rogers) will get into a heated argument. She’s not happy about him barging in on her mission, but there’s not much she can do about it. Emma’s (Brooklyn Rae Silzer) excited about it, so at least someone in the family’s pleased!

Unfortunately, it won’t take long for Robert and Anna to start bickering about Heinrik. General Hospital spoilers say Anna will defend her hunt and argue that she bears some responsibility in this. It’s not like Faison (Anders Hove) could’ve created Heinrik without her. Anna will insist that’s why she feels obligated to track him down. She knows Heinrik’s had it rough, so she just wants to protect him.

Meanwhile, Jason (Steve Burton) will bring Sam (Kelly Monaco) up to speed on the search for Heinrik. He’ll talk about the money trail they’re following as well as some of the clues Heinrik has planted. Jason will explain that Heinrik may be trying to draw his mother out in the open. 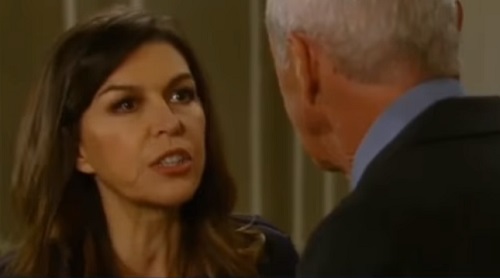 Back in Port Charles, Ava (Maura West) will mull over Griffin’s (Matt Cohen) secret. She’ll contemplate the test results she looked at and try to figure out what he’s hiding. Elsewhere, Kiki (Haley Erin) will face doubts. Perhaps she’ll worry that Dr. Bensch (James DePaiva) won’t be able to keep his promise. Kiki may fear that maintaining a professional relationship with this guy will be impossible.

At GH, Griffin will stop Finn (Michael Easton) in the hallway. He’ll wonder if Anna’s OK, but Finn may suggest that he doesn’t really know. Things are weird between them now that Finn’s moving on with Alexis (Nancy Lee Grahn). Still, Finn can tell that Anna’s up to something. He may point that out to Griffin, but he’ll probably add that it’s her life. Anna certainly doesn’t have to keep Finn in the loop.

Across town, Nelle (Chloe Lanier) will gaze at something on her phone. It undoubtedly ties in with her Carly (Laura Wright) plot somehow. Nelle will look satisfied, so her scheme must take another step forward on Monday. She’ll hope to be rid of Carly for good soon.

Nelle left a creepy note on Carly’s windshield, so that’ll lead to some interesting moments. It said, “FIND ME WHERE YOU LEFT ME TONIGHT.” Carly will probably head back to the site of the explosion. She’ll definitely be rattled as she calls out Morgan’s (Bryan Craig) name and starts a search.

Finally, Sonny (Maurice Benard) will blast Avery’s (Ava and Grace Scarola) nanny for leaving his daughter alone with Mike (Max Gail). She turned her back for a minute and Mike was suddenly gone with the tot. General Hospital spoilers say Sonny will be frantic as he tries to locate them both. He’ll want to find Mike and Avery before they land in harm’s way.

GH has a great episode in store for us. We’ll give you updates as other news comes in. Stick with the ABC soap and don’t forget to check CDL often for the latest General Hospital spoilers, updates and news.