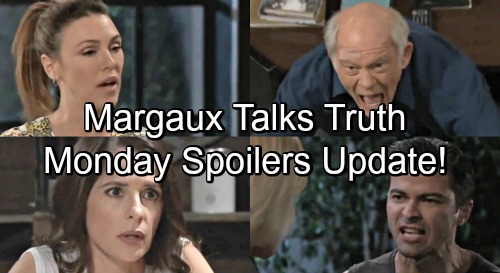 General Hospital (GH) spoilers for Monday, August 27, 2018 reveal trouble arises for several residents of Port Charles, while some demand answers, truths are exposed and confrontations happen. Viewers of the ABC soap opera will not want to miss out on the GH Monday episode!

GH spoilers say Curtis Ashford (Donnell Turner) convinces his fiance, Jordan Ashford (Vinessa Antoine) to go to counseling with his Aunt Stella Henry (Vernee Watson). The Counselor, Dr Linda Massey (Chandra Wilson) wants to know what brought the family to the session; how long before it becomes heated and the disaster we all know it will be?

DA Margaux Dawson (Elizabeth Hendrickson) knows Drew Cain (Billy Miller) is suspicious of her and her motives. After he finds the flash drive at her Metro Court apartment she approaches him, willing to tell him everything he wants to know.

Griffin furiously wants Ava to admit that she helped send Carly Corinthos (Laura Wright) to Ferncliff. Will she admit her role in everything that transpired regarding Carly and Nelle Benson (Chloe Lanier)?

PI Sam McCall (Kelly Monaco) isn’t buying Kristina Corinthos’ (Lexi Ainsworth) excuses and while they are enjoying a coffee together she questions Kristina, wondering why it seems like Kristina doesn’t want to go. Will Kristina explain why she is truly back in Port Charles?

General Hospital spoilers reveal Jason Morgan (Steve Burton) bursting into the living room of the Corinthos house, ready to fire his gun. As the alarms are sounding, Sonny Corinthos (Maurice Benard) comes down the stairs with his gun also drawn. Carly shouts at them to stop as she realizes that Sonny’s father, Mike Corbin (Max Gail) is the cause of the alarms and it appears he is in crisis.

Be sure to tune into ABC’s General Hospital (GH) on Monday, August 27, 2018 to catch up on everything happening right now in Port Charles. Check CDL General Hospital spoilers often for updates, news, and spoilers!