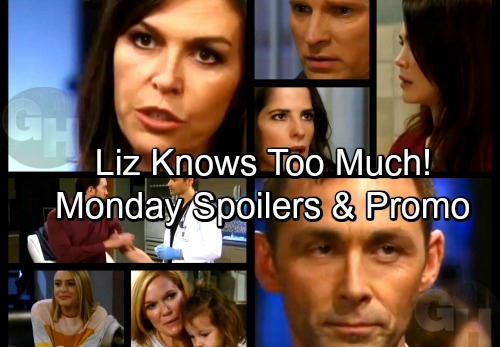 General Hospital (GH) spoilers for Monday, March 12, tease that Sonny (Maurice Benard) and Carly (Laura Wright) will have another tough chat. Their conversation with Mike (Max Gail) brought a real roller coaster of emotions. One minute Mike was furious and the next he couldn’t remember what they were talking about.

That made it easier to calm Mike down, but it also highlights how far his Alzheimer’s has progressed. Carly will think Mike needs to make some decisions while he still can. If he has any wishes about his care or what happens after he dies, now’s the time to address all that. Carly and Sonny will talk about how to bring this up with Mike without upsetting him too much. 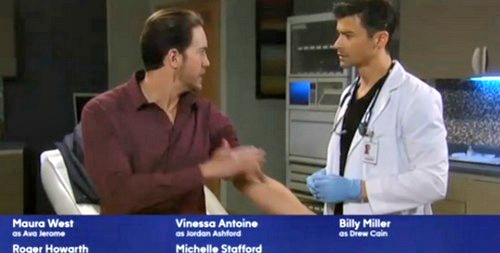 General Hospital spoilers say Ava will feel hopeful about a more permanent arrangement. She’ll believe Nelle’s (Chloe Lanier) sneaky plan will help her out, but she obviously won’t fill Kiki in on that!

Elsewhere, Anna (Finola Hughes) will have a heated confrontation with Valentin (James Patrick Stuart). She’ll demand answers about why he lied to her. Anna found out that she gave birth to a boy and not a girl like Valentin claimed. She’ll suggest there must be a reason he deceived her. It shouldn’t take Anna long to figure out that Heinrik was her son after all.

Speaking of Heinrik aka Peter (Wes Ramsey), he’ll seek a diagnosis from Griffin (Matt Cohen) on Monday. He’ll want a test for Huntington’s disease so he can learn his fate. Peter will insist that he needs to know one way or another. He just can’t live with the fear and uncertainty.

Other General Hospital spoilers state that Liz (Rebecca Herbst) will continue to eavesdrop. She just heard Sam (Kelly Monaco) admit her big secret. Sam mentioned that she hasn’t told Drew (Billy Miller) about being in love with Jason (Steve Burton), so Liz will have a lot to process. She’ll overhear Sam insisting that Drew deserves the truth, which means Liz may hold her to that!

Nearby, Drew will order Franco (Roger Howarth) to stop hiding things. He heard some dark news from Jim Harvey (Greg Evigan), so he’ll want Franco to share his side of the story. Franco will beg Drew to believe that he wasn’t a monster as a child. Despite all the evidence, Franco just won’t believe he tried to kill his little buddy.