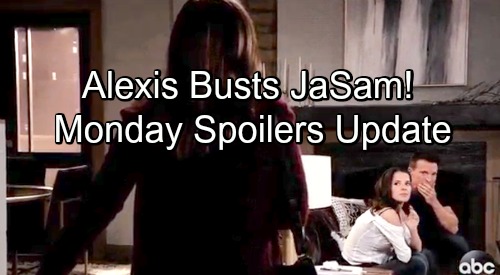 Nina will fret to Lulu in Monday’s new GH episode. She’ll wonder what she’ll do if Sasha doesn’t want anything to do with her. Lulu might argue that Nina should cross that bridge when she comes to it. There’s no point in worrying until she actually meets Sasha and gives her a chance. Sadly, Nina’s instincts are correct here. Sasha won’t be interested in bonding, so that’ll be a tough blow soon.

Meanwhile, Ava (Maura West) and Kiki (Hayley Erin) will have a heated showdown. They’ll cross paths by mistake, but Ava will take the opportunity to infuriate her daughter. Kiki will decide she’s not going to stand for it. She’ll probably be out on a date with Griffin (Matt Cohen), so she may gloat about it and shoo her mother away. Kiki will vow to yank Ava out of there herself if she doesn’t go willingly!

Other General Hospital spoilers say Laura (Genie Francis) will put Valentin on notice. She’ll reveal that she’s in Port Charles to stay and she won’t be pushed around. Elsewhere, Margaux (Elizabeth Hendrickson) will find out her father’s murder investigation has been dropped. Obviously, she’ll be quite upset about that.

Margaux is determined to bring Sonny (Maurice Benard) down and avenge her dad’s death, so she’ll keep up the fight anyway. That’s probably what Sonny will be afraid of on Monday. General Hospital spoilers say Mike (Max Gail) will make a promise to his son. He’ll recap what he told Carly (Laura Wright) and Jason (Steve Burton) about the missing weapon.

Mike will insist that his memory’s clear for once. He knows he tossed that gun in the Hudson, where it’s been for over 30 years. Sonny may believe his pop’s version of events, but that doesn’t take care of his Margaux problem!

At Sam’s (Kelly Monaco) place, things will get hot and heavy. Sam’s kiss with Jason (Steve Burton) will turn incredibly passionate, so they’ll nearly make love in the living room. Alas, timing is everything. Alexis (Nancy Lee Grahn) will arrive to bust these two crazy kids on the sofa, so they won’t get too far.

Jason and Sam will have another close call later this week, October 8-12, but that sex session won’t pan out either. Will they ever get back in the bedroom? “JaSam” fans sure hope so! We’ll give you updates as other GH details emerge. Stick with the ABC soap and don’t forget to check CDL often for the latest General Hospital spoilers, updates and news.