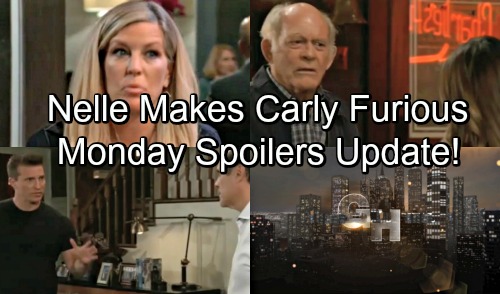 General Hospital (GH) spoilers for Monday, September 10, tease that Mike (Max Gail) will whack the gas line until a steady leak is filling Charlie’s Pub. He’ll seem a bit disoriented as he makes his way back upstairs, where Kristina (Lexi Ainsworth) will be chatting with Julian (William deVry). She’ll eventually catch a glimpse of Mike and sense that he’s in panic mode.

Kristina will ask what’s going on, but Mike will simply stammer that she’s not supposed to be there. He’ll be terrified that Kristina’s going to get caught in the looming disaster. Julian will ultimately smell gas and make an announcement to his patrons. He’ll suggest that they have to put an evacuation plan in motion immediately.

Kristina will try to hurry Mike out, but he’ll refuse to listen. As a result, Julian will have to take charge. He’ll make sure Mike gets to the exit, but Kristina will spot Mike’s abandoned wrench and conclude that he sabotaged the pipe downstairs. She’ll believe she can prevent the explosion, so she’ll rush back in and put her own life on the line.

This shocking GH drama will continue through mid-week, so don’t miss a minute of the action. In the meantime, Valentin (James Patrick Stuart) will get good news and bad news. Curtis (Donnell Turner) will reach out and fill his client in on Tuesday. He’ll explain that Carter didn’t know who Nina’s (Michelle Stafford) baby ended up with, but he confirmed there indeed was one.

Curtis will assure Valentin that they have options. He’ll explain how he plans to follow the kid trail, so Valentin still has hope. Of course, Nina has discovered some hope as well. Maxie (Kirsten Storms) will discourage Nina from trying to track down her grown child. She’ll feel like Nina’s putting a lot of stock in half a locket, but Nina will insist that she has to get to the bottom of this.

Other General Hospital spoilers say Jason (Steve Burton) and Sonny (Maurice Benard) will rehash the incriminating evidence situation. Despite Jason’s attempts to reassure him, Sonny will think that gun’s with the body and could tie back to him. Thanks to the looming explosion at the pub, that proof could easily be unearthed. The damage could disturb things and bring out buried secrets.

Over with Michael (Chad Duell), he’ll tell Carly (Laura Wright) about a troubling letter he received. Nelle (Chloe Lanier) wrote Michael from Pentonville, so Carly isn’t going to be happy. She’ll launch a tirade about her nemesis and urge Michael to put Nelle out of his mind for good.

Unfortunately, Michael just can’t do that. He’ll continue to be haunted by the loss of his son and whatever clues Nelle might decide to offer. We’ll give you updates as other General Hospital details emerge. Stay tuned to ABC’s GH and don’t forget to check CDL often for the latest General Hospital spoilers, updates and news.