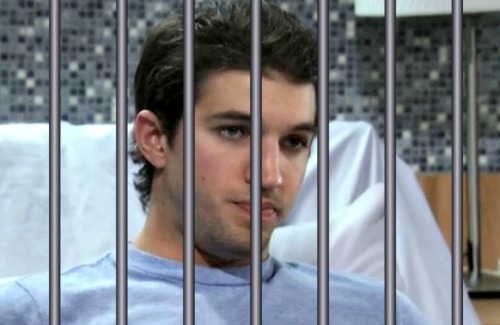 General Hospital (GH) spoilers tease that a mysterious patient is being held at Ferncliff. Jason (Steve Burton) finished cleaning up the mess Carly (Laura Wright) intentionally made and moseyed out into the hallway. He eventually heard screams coming from another room. The patient sounded male, so that’s our first clue. We can use it to help crack the case!

Jason was about to approach the nearby room, but Kevin (Jon Lindstrom) stopped him. When Jason asked who was in there, Kevin simply gave him a cold glare. It’s possible that Kevin’s not even sure who’s in that room. He’s not the only doctor working at Ferncliff, so another doc could easily be in charge of that patient.

Perhaps Kevin just doesn’t want Jason poking his nose where it doesn’t belong. He warned Jason that this was a bad idea anyway. If Jason’s going to stick around, he needs to stay out of trouble. Investigating screams and asking questions isn’t the way to do that.

General Hospital spoilers say Kevin will push Jason to back off or risk being turned in. Jason will run back to Carly and start spilling his fears. He’ll worry that Kevin’s going to blow this for him, but it seems Kevin will keep quiet. Mary Pat (Patricia Bethune) will ultimately be the one who discovers the truth and kicks Jason out.

As for that mystery man, one possibility immediately comes to mind. Could Morgan (Bryan Craig) be in there? Mary Pat keeps rubbing Morgan’s death in Carly’s face. It’s suspicious for her to bring it up and make a big deal about it. That could be a hint that Morgan’s still alive and VERY close.

It’d be a great twist for Carly to find her presumed dead son in Ferncliff. That’s probably the only thing that would make her GH ordeal worthwhile. Morgan may have amnesia or he could simply be trapped and unable to contact his family. Carly just might stumble across him eventually.

Mary Pat seems a bit shady, so she may know more than she’s letting on. Is there a reason she has it in for Carly? Could it be tied to Morgan’s potential Ferncliff stint? We’ll give you updates as other General Hospital news comes in. Stay tuned to ABC’s GH and don’t forget to check CDL often for the latest General Hospital spoilers, updates and news.