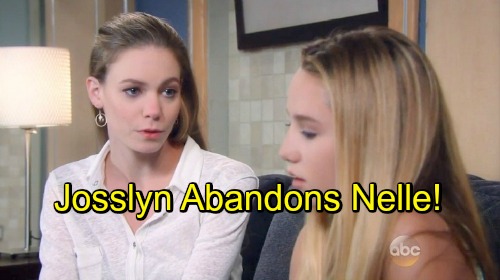 In fact, Josslyn is pretty much the only person who still has the wool pulled over her eyes. Fortunately, her latest discovery should help her wise up. After chatting with Michael and Nelle, Josslyn somehow ended up with crucial evidence. She seemed baffled by the cologne bottle she pulled out of her bag.

Of course, that cologne bottle belonged to Morgan Corinthos (Bryan Craig). Nelle used it to spritz Morgan’s grave during her crazy Carly Corinthos (Laura Wright) plot. Now that Josslyn has it, her friendship with Nelle could start to crack. She just has to figure out where it came from first.

Did Joss recognize Morgan’s signature scent immediately? She gave the bottle a sniff and looked puzzled. Josslyn may just be confused by the discovery in general, but there’s a chance she remembers that smell. Carly certainly did!

However, Morgan’s not the only guy in the world to ever wear that brand. Josslyn might wonder if it belongs to her boyfriend, Oscar Nero (Garren Stitt), but she may nix that idea after thinking it over. She’s never smelled that scent on him before. Josslyn knows Michael doesn’t wear that kind either.

Since Joss had just been to the Quartermaine mansion, she may determine she inadvertently picked it up there. Josslyn brushed Nelle’s purse and stuffed a few things back in, so that must’ve been the source of the mix-up. Perhaps Josslyn will have a shocking realization. She might put it all together and discover that Nelle had Morgan’s cologne.

Joss would be smart to keep the proof in her possession. She could also leave Nelle out of the loop on what she knows. It’d be great to see Josslyn pitch in on Michael’s takedown plan. Detective Chase (Josh Swickard) was there the night Carly freaked over the cologne in the cemetery. He even testified about it in court, so Nelle’s going to have trouble lying her way out of this one.

Sooner or later, Josslyn will have to accept that Nelle betrayed her. She’ll hate that she ever bought Nelle’s bogus staircase story. Joss realize that everything out of this girl’s mouth is a lie! Nelle’s the reason for Carly’s misery in Ferncliff, so you’d better believe Josslyn will want the schemer to suffer.