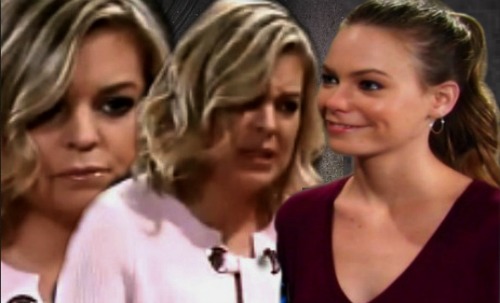 General Hospital (GH) spoilers tease that Maxie (Kirsten Storms) could have plenty of heartache in her future. She’ll grow increasingly concerned about Nathan’s (Ryan Paevey) safety in the weeks ahead. But as CDL announced earlier Ryan Paevey is leaving GH so either he will die or disappear shortly. Of course, Maxie will also worry about her own fate. Most of all, she’ll fear for the life of her child.

Maxie will be a big bundle of nerves and rightly so. Faison’s (Anders Hove) involved and that’s certainly something to be upset about. General Hospital spoilers suggest that some doom and gloom’s coming up in this storyline. Nathan will face a grim fate thanks to all this drama.

What happens when poor, pregnant Maxie loses her husband? Nathan’s demise will completely devastate her. The rest of Maxie’s pregnancy could be pretty rough. Her other trimesters could bring some scary moments, so she would have to be careful under all this emotional stress.

Maxie may make it to the birth, but there’s no guarantee that it’ll be a joyous event. For starters, Maxie would be heartbroken without Nathan by her side. Plus, we can’t forget that Nelle’s (Chloe Lanier) also expecting. GH must have a reason for making both women pregnant at the same time. Soaps almost never do that unless they intend for one of the babies to be stolen.

Nelle has a history of stirring up trouble. Once a schemer, always a schemer! It’s easy to imagine her cooking up a plot where she steals Maxie’s baby after losing her own. Maxie could end up with Nelle’s deceased little one. Nelle will undoubtedly have made progress with Michael (Chad Duell) by then. She won’t want to blow it by not giving him a kid.

If that’s the route GH intends to take, just think about how crushed Maxie will be. She could completely go off the rails if she has to face Nathan’s death and what seems like the death of her child. This would give Kirsten Storms a fantastic grief arc.

On the bright side, it would also bring sweet relief when the truth is finally exposed. Maxie could be reunited with her son or daughter and begin to heal. General Hospital spoilers say some crazy drama’s ahead, so stay tuned. We’ll give you updates as other GH news comes in. Stick with the ABC soap and don’t forget to check CDL often for the latest General Hospital spoilers, updates and news.