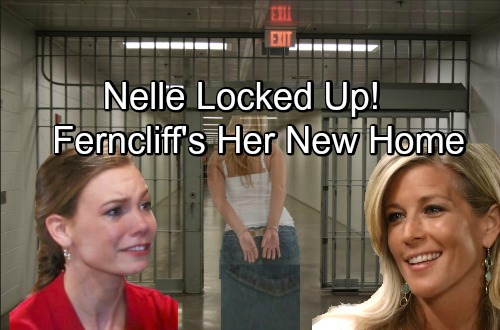 General Hospital (GH) spoilers tease that Nelle Benson’s (Chloe Lanier) time in Port Charles will come to an end. Lanier’s departure has been confirmed, so we’re in the final stretch of Nelle’s scheming. It sounds like a good dose of karma’s headed Nelle’s way, which means GH fans are in for a treat.

Sonny Corinthos (Maurice Benard), Jason Morgan (Steve Burton) and Michael Corinthos (Chad Duell) are all determined to stop Nelle’s reign of terror. She’s had power of over the Corinthos clan for long enough. Of course, Detective Harrison Chase (Josh Swickard) also got burned by Nelle. He’ll definitely play a crucial role in all the takedown drama.

What kind of crushing fate will Nelle face? General Hospital may have just given us a huge clue. When Nelle stopped by Ferncliff, Carly Corinthos (Laura Wright) managed to stay calm. Instead of a raging argument, they both opted for phony smiles and sarcastic remarks. Carly suggested that maybe Nelle will score a Ferncliff stint of her own sometime. Perhaps that day’s coming sooner than Nelle expects!

Another GH promo dropped a hint about Chase’s latest idea. General Hospital spoilers say he’ll rope Michael into a seemingly lethal plot. However, things aren’t usually as they seem on a soap! Chase will suggest that Michael needs to die, so he’ll have to explain what he means by that.

After Nelle allegedly killed her fiancé, Chase was the investigating officer. He’s been taking a look at Zachary Grant’s case again, but he may have more luck with a fresh angle. That could be where this “deadly” plan comes in. Michael may end up faking his own demise with a little help from the sneaky detective.

It’s possible Chase wants to set Nelle up for an attempted murder. If he can convince her he still loves her, he might suggest plotting it together. Nelle could be in big trouble if she gets caught on tape. On the other hand, Chase may hope to give Nelle a taste of her own medicine. After his sudden “death,” Michael could gaslight Nelle since that was how she tortured Carly.

Regardless, Nelle may be driven over the edge in the end. Once her dreams are dashed, Nelle could lose it and land in Ferncliff – just as Carly predicted. GH viewers would love to see Nelle suffer in there with Mary Pat (Patricia Bethune)! Michael may be able to wrestle his baby away from Nelle and free Carly the process. Those are the only two goals he cares about right now.

Will Nelle’s GH journey wrap up in a mental institution? Is that the payback Nelle deserves? One way or another, Carly should get the last laugh. Michael will do whatever it takes to make sure of it! We’ll give you updates as other news comes in. Stick with the ABC soap and don’t forget to check CDL often for the latest General Hospital spoilers, updates and news.