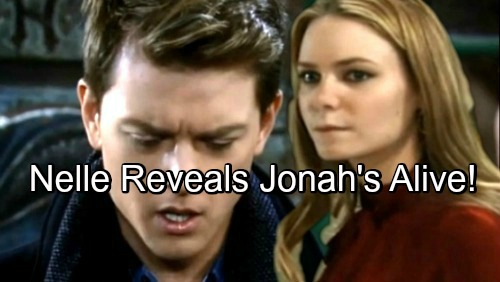 General Hospital (GH) spoilers tease that Michael (Chad Duell) will be drowning in grief. He’s been trying to ignore his pain, but it doesn’t seem to be working. If Michael wants to move on, he has to deal with his difficult feelings. He needs to open up about his sorrow and truly work through it.

In a recent episode, Michael considered checking out the bereavement group that Stella (Vernee Watson) and Kim (Tamara Braun) suggested. However, he just couldn’t bring himself to attend. Perhaps Michael thinks it’ll only bring more suffering, but sometimes things have to get worse before they can get better.

Next week, General Hospital spoilers say Michael will be haunted by his loss. He might have nightmares of cradling his dead son in his arms. That was certainly one of the toughest moments of Michael’s life. He was devastated when he realized “Jonah” was cold and motionless.

It was awfully cruel of Nelle to hand over the baby without informing Michael of his death. Of course, the real problem is that he wasn’t even Michael’s kid! Now it’s just a matter of when and how Michael will learn the truth.

GH spoilers say Michael will continue to be tormented this fall, but could he get a few clues, too? That depends on the key players in this baby swap. Brad’s (Parry Shen) guilt will really take a toll on him as the months go by. Watching “Wiley” thrive should make him feel terrible about keeping this secret.

However, Brad knows what’s at stake here. With Julian’s (William deVry) support, Brad may be able to stay tight-lipped. Nelle (Chloe Lanier), on the other hand, could pose a surprising threat to Brad and Lucas’ (Ryan Carnes) happiness. She was determined to hurt Michael and the rest of the Corinthos clan, but she just might change her tune.

Nelle contacted Kim and asked the doc to blame her behavior on hormones. That shows Nelle’s desperate behind bars. Could she be desperate enough to reach out to Michael and propose a deal? Nelle might admit that their baby didn’t die after all. She could promise to reveal the whole story if Michael can get her off the hook.

Michael might think Nelle’s lying at first, but he could eventually believe the idea. He knows just how conniving Nelle can be. Michael could decide this scheme would be right up her alley! He may not put all the puzzle pieces together initially, but an investigation would make Brad nervous.

Could Michael get tipped off and try to crack the case? Will he ultimately figure out that “Wiley” is his son? We’ll give you updates as other General Hospital news comes in. Stick with ABC’s GH and don’t forget to check CDL often for the latest General Hospital spoilers, updates and news.