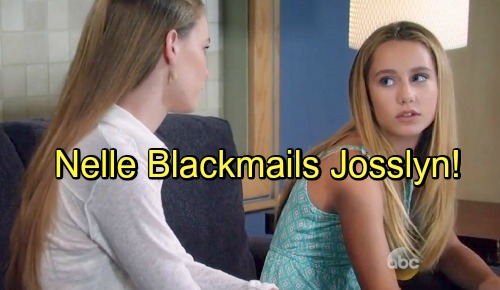 Now that Oscar has unintentionally busted Josslyn, her fate’s in Nelle’s hands. She’s always considered Joss to be a gullible ally, but now she knows where they stand. Nelle probably thinks she’s the only one who’s allowed to lie! When someone crosses her, Nelle certainly knows how to unleash her wrath.

Of course, Joss had already lied to Oscar about spilling his present. She didn’t want to backtrack on that and admit she was regifting some random cologne she found in her bag. Since the bottle was half-empty anyway, Josslyn probably thought one more fib to Nelle wouldn’t hurt. She has no idea what’s at stake here!

However, Josslyn must be getting suspicious. She’s surely wondering why this pregnant blonde was so desperate to find some cologne. General Hospital viewers could see the wheels turning for Joss, so she may be on the right track.

Nelle appears to have formed a genuine friendship with Josslyn, but she may throw that out the window. The last thing she needs is Carly Corinthos’ (Laura Wright) teenage daughter stirring up trouble. If Nelle starts to view Josslyn as a real threat to her happiness, you’d better believe she’ll retaliate.

Nelle might fight back by framing Joss for something. Then again, she may not even have to! Josslyn might’ve committed a crime that could work to Nelle’s advantage. GH fans watched Joss try to remove the security tag off a seemingly stolen bikini. Josslyn was awfully snippy and emotional about her family missing her award ceremony, so she may be acting out with some shoplifting.

It’s possible the bikini fell out of Nelle’s bag and got mixed up in Josslyn’s things, but it doesn’t seem likely. Nelle never mentioned a missing bikini and it’s not like she could wear it right now anyway. She’s ready to pop out a kid any day now.

There’s a chance Nelle intended to use is as part of another Chase (Josh Swickard) setup, but why wouldn’t she have just purchased it? She had money for the scarf and the T-shirt from the bar in Florida. Why take such an unnecessary risk? None of it adds up, so Josslyn is probably the guilty party.

This presents Nelle with an interesting opportunity. She might find out that Joss is a thief and use it as blackmail material. Nelle could suggest that she has her reasons for the cologne hunt. She could advise Joss not to dig into them. In return, Nelle could keep her mouth shut about the little shoplifter.

If Josslyn doesn’t listen and discovers the cologne bottle belonged to Morgan, she may sacrifice her own fate to help her mom. Josslyn would definitely be willing to get arrested for Carly’s sake. If she turns on Nelle, she’ll undoubtedly find her butt sitting in jail soon!