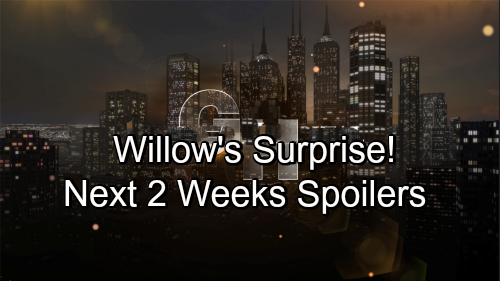 General Hospital (GH) spoilers for the next two weeks tease that things are about to heat up in Port Charles. During the week of November 26-30, Jordan (Briana Nicole Henry) and Curtis (Donnell Turner) will have a wonderful wedding. They’ll happily say their vows in front of all their loved ones.

Meanwhile, Michael (Chad Duell) will once again feel a strong connection with “Wiley.” He’ll unknowingly hang out with his own son at Carly (Laura Wright) and Sonny’s (Maurice Benard) Thanksgiving party. Brad (Parry Shen) will have a hard time keeping his cool under pressure!

Other General Hospital spoilers say Laura (Genie Francis) will open up to Lulu (Emme Rylan). She’ll be upset about “Kevin” aka Ryan (Jon Lindstrom) and his new romance with Ava (Maura West). Laura will be deeply troubled by the path “Kevin’s” headed down. She just won’t understand what a guy like him sees in a woman like Ava. Of course, that’s only because Laura doesn’t know about the twin swap!

Elsewhere, Peter (Wes Ramsey) and Maxie (Kirsten Storms) will strengthen their bond. They’ll continue their slow and steady transition from friendship to more. GH clearly has plans to pair these two up. It’s just a matter of how long it’ll take them to get there.

The week of December 3-7 will bring a moment of privacy for Kim (Tamara Braun) and Drew (Billy Miller). They’ll undoubtedly have Oscar (Garren Stitt) on their minds. There’s been a lot of tension between Drew and Kim lately, but maybe that’ll begin to lift. If they lean on each other a bit more, there’s a chance they’ll become more than co-parents.

Elsewhere, a surprising invite will arrive for Willow (Katelyn MacMullen). Will it be from Chase (Josh Swickard) or Michael (Chad Duell)? Those are her two potential suitors right now, so it should be interesting to see what’s next in this love triangle. Across town, Jordan and Chase’s investigation will take a stunning turn. Thanks to new clue, they’ll inch closer to catching PC’s latest killer.

GH fans will also see Sam (Kelly Monaco) turn to Curtis (Donnell Turner) for assistance. She’ll need his help with a project, so he’ll do his best to pitch in. Elsewhere, Ava will fly off the handle. Someone will leave her enraged, so it might be Kiki (Hayley Erin), Griffin (Matt Cohen) or even Laura. Regardless, Ryan should love seeing Ava at her worst! That really gets his motor running.

Over with Anna (Finola Hughes) and Finn (Michael Easton), it looks like they’ll consider breaking up. Perhaps all this Hayden (Rebecca Budig) drama will leave their relationship strained. Finally, art therapy could bring some surprises for Franco (Roger Howarth). Will he learn more about what Aiden’s (Jason David) going through? Could Aiden point the finger at Charlotte (Scarlett Fernandez)?