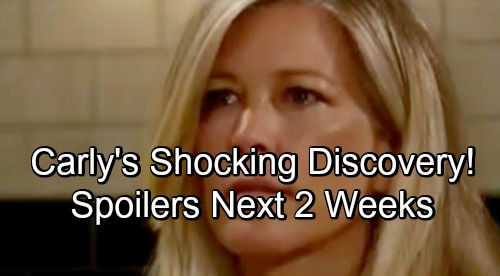 General Hospital (GH) spoilers for next two weeks tease that we’ll see some sneaky plans and serious shockers. The week of June 25-29 will deliver a tough blow for Carly (Laura Wright). Jason (Steve Burton) will be exposed by cruel Mary Pat (Patricia Bethune) and thrown right out of Ferncliff.

Mary Pat will undoubtedly make Carly even more miserable once her link to Jason’s uncovered. She won’t like a patient trying to pull one over on her. Later, Carly will battle intense curiosity. This probably has something to do with that screaming man down the hall. She was taken aback when she first heard him, but it may take some time to get answers.

If the yelling continues, Carly may decide to sneak over during her puzzle time and investigate. Meanwhile, General Hospital spoilers say Kiki (Haley Erin) won’t give up. After Alexis (Nancy Lee Grahn) walks away from the case, Kiki will need another attorney. Ava (Maura West) will mull over some options before Scott (Kin Shriner) receives an enticing offer. Will he take over the case?

Elsewhere, Chase (Josh Swickard) will make a vow. His storyline is all about Nelle (Chloe Lanier) now, so his promise may involve her. Chase may assure Michael (Chad Duell) that they’re going to catch Nelle in her lies. He would love to lock her up for Zach’s murder or any other crime she committed.

The week of July 2-6 will bring expansion ideas. Julian (William deVry) has had some success with Charlie’s Pub, so he might want to look into some other locations. Over with Maxie (Kirsten Storms), she’ll feel a bit torn. Will evidence of Peter’s (Wes Ramsey) kidnapping surface? That might leave Maxie with mixed emotions. Part of her may be think he deserves it and another part of her could be worried.

Across town, GH spoilers state that Nelle’s appointment will be postponed. Is this something baby related? There’s bound to be some kid drama soon. Nelle might put off a meeting with Kim (Tamara Braun) to handle a problem. If so, she could get caught somewhere unexpected when she goes into labor.

Other General Hospital spoilers say Sonny (Maurice Benard) will get some good news. He’ll eventually be allowed in Ferncliff, so he’ll be able to offer Carly reassurance. She should be pleased by her surprise visitor, especially since she won’t have Jason to look out for her anymore.

Later, Jason will be there for his pal. He’ll support Sonny and let him know they’re closing in on Nelle. Jason will feel confident that Carly’s going to have her freedom soon. We’ll give you updates as other GH details emerge. Stay tuned to the ABC soap and don’t forget to check CDL often for the latest General Hospital spoilers, updates and news.