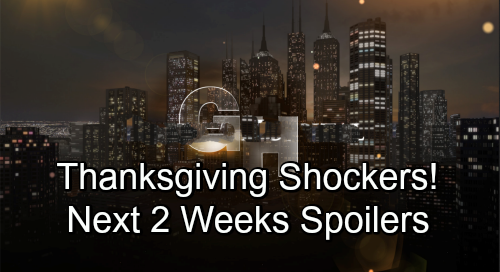 General Hospital (GH) spoilers for the next two weeks tease that some tough decisions are on the way. During the week of November 19-23, Oscar (Garren Stitt) will feel torn. He’ll appreciate a frank chat with Monica (Leslie Charleson) about his condition, but it could bring doubts. Oscar may wonder if it’s really a good idea to turn down his clinical trial chance.

Of course, Monica will try to nudge Oscar back toward Kim (Tamara Braun) and Drew (Billy Miller) as well. As a court hearing approaches, Oscar will be left wondering what to do. Alexis (Nancy Lee Grahn) has tried to make Oscar see that emancipation won’t be easy. He doesn’t seem ready for true adulthood yet, so Oscar will feel overwhelmed and undecided.

Other General Hospital spoilers say Laura (Genie Francis) will face some surprises. The first one may or may not be pleasant. Laura will have a lot to process thanks to whatever she encounters. The second bombshell will definitely bring pain. Laura will have horrible timing, so it sounds like she’ll witness Ava (Maura West) and “Kevin” aka Ryan (Jon Lindstrom) growing closer.

Ava will also stage a stunning scene between Griffin (Matt Cohen) and Sasha (Sofia Mattsson). She’ll make her drugged victims look like lovers, so Kiki should explode when the finds them in bed together. The week of November 26-30 will deliver even more chaos. Ava will invite “Kevin” over to her penthouse, so she’ll be entertaining a serial killer. Could they end up having a steamy sex session?

Over with Maxie (Kirsten Storms) and Peter (Wes Ramsey), their connection will strengthen. GH fans can expect some warm moments for these two. Elsewhere, Aiden’s (Jason David) issues will continue to take a toll on Liz (Rebecca Herbst). Franco (Roger Howarth) will think enough is enough when it comes to all this bullying. He’ll take steps to better understand the situation and put a stop to it.

Next, Julian (William deVry) will feel a bit dismissed. Alexis will push him away, but will this be personal or professional? It’s possible Alexis will simply want Julian out of Oscar’s business. Then again, old feelings could start creeping in. Alexis may want to keep Julian at a distance with that in mind.

Across town, General Hospital spoilers say Valentin (James Patrick Stuart) will tackle a mess. He’ll be on the receiving end of a vicious warning, so Sasha may fly off the handle. As for Jordan (Briana Nicole Henry), she’ll face some startling developments. Those might have something to do with Marcus’ (Nigel Gibbs) arrival in Port Charles. Jordan should be pleased to see Stella dialing down her rage and reconnecting.

Thanksgiving will bring some shockers, so maybe Stella will attend Jordan and Curtis’ (Donnell Turner) wedding after all. Marcus just might talk her into it! We’ll give you updates as other GH news comes in. Stay tuned to the ABC soap and don’t forget to check CDL often for the latest General Hospital spoilers, updates and news.