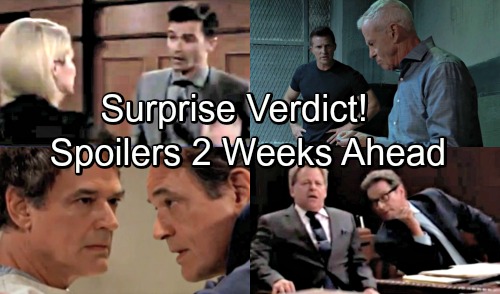 General Hospital (GH) spoilers for the next two weeks tease that more Port Charles drama’s on the way. The week of August 13-17 will bring more sexual harassment trial shockers. Thanks to Scott’s (Kin Shriner) pressure, Griffin (Matt Cohen) will have to make a terrible admission. The fact that he hooked up with Kiki (Hayley Erin) will inevitably leave Alexis (Nancy Lee Grahn) with an uphill battle.

Nevertheless, Alexis won’t be willing to throw in the towel just yet. She’ll explain the facts to the jury and hope they see things from Kiki’s perspective. There’s a big difference between a creepy doctor harassing Kiki at work and a consensual encounter with someone like Griffin. Dr. Bensch (James DePaiva) will believe his win is a done deal, but Alexis will keep fighting until the very end.

Other General Hospital spoilers say Franco will get some infuriating news. He’ll probably explode at Ava (Maura West) for turning this into a public spectacle and perhaps costing Kiki a victory. Franco will understand that Ava’s in pain, but he won’t think she should’ve robbed Kiki of her chance at justice.

Later, GH fans can expect a nervous Kiki to learn the outcome. She’ll hope Dr. Bensch pays the price, but she can’t be sure of anything now. Meanwhile, Josslyn (Eden McCoy) will confess her crimes to Oscar (Garren Stitt). As she rushes to Cameron’s (William Lipton) defense, Joss will admit she shoplifted, too. She’ll add that she’s stopped, but the revelation will still catch Oscar off guard.

Over with Cam, he’ll face Liz’s (Rebecca Herbst) wrath for stealing. You can bet Cameron will be scolded and grounded. The week of August 20-24 will put Margaux (Elizabeth Hendrickson) on the hot seat. Drew (Billy Miller) will seek answers and hope he can figure out Margaux’s agenda. He’ll most likely start to believe there’s some truth to Jason’s (Steve Burton) allegations.

Elsewhere, General Hospital spoilers say Valentin (James Patrick Stuart) will make a stunning discovery. A family secret will be revealed, so Valentin will have to decide what to do with it. Curtis (Donnell Turner) will get pulled into this storyline, which probably means Valentin will need some investigative help.

Will what Valentin uncovers involve the return of Madeline Reeves (Donna Mills)? Will the secret involve Valentin’s family with Nina or is this a buried Cassadine bombshell? Regardless, Valentin will want to find out more.

General Hospital spoilers say Sonny (Maurice Benard) and Jason will worry about Carly (Laura Wright). Since Michael (Chad Duell) will be suffering, that could put Carly in a dark place as well. Across town, Chase (Josh Swickard) will work on a new case. Margaux passed along something that seemed awfully dangerous, so Chase could be headed for trouble.

It looks like the action’s heating up in PC! We’ll give you updates as other GH details emerge. Stay tuned to the ABC soap and don’t forget to check CDL often for the latest General Hospital spoilers, updates and news.