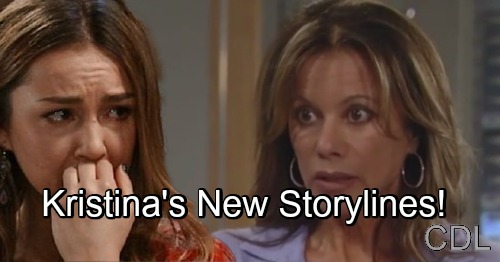 General Hospital (GH) spoilers tease that Alexis (Nancy Lee Grahn) will wrap up the sexual harassment trial and hope for the best. Kiki (Hayley Erin) has obviously been an especially tricky client. Since there wasn’t really any evidence against Dr. Bensch (James DePaiva), Alexis had her work cut out for her anyway. The fact that Kiki lied to her only made matters worse.

However, Alexis realizes that Kiki deserves justice. She’ll do her best to get it for her, but she certainly can’t guarantee anything. Griffin’s (Matt Cohen) one-night stand bombshell will surely make the case more complicated. On the bright side, Alexis will be finished with this mess pretty soon. She’ll be able to move on and focus on some family issues that need her attention.

GH viewers know Alexis has had Kristina (Lexi Ainsworth) on her mind lately. During a chat with Sam (Kelly Monaco), Alexis admitted that there was still tension between them. She’s been in touch with Kristina, but she never dares to go beyond questions about the weather and daily activities. Alexis and Kristina’s bond just isn’t there anymore, but this devoted mom will be determined to change that.

General Hospital spoilers say Alexis will make an effort during new GH episodes the week of August 20-24. It won’t be long until she’s making real progress with her daughter. Alexis misses Kristina, so there’s a good chance Kristina misses her, too. These two just need to discuss any lingering problems and work through them together. With any luck, they’ll be able to do just that.

Since we know Kristina is coming back to Port Charles, perhaps Alexis will be the reason for that. She may call Kristina and ask her to come home for a while. Alexis might point out that Michael (Chad Duell) could use Kristina’s support right now, too. Of course, she’ll also admit that she just really wants to see her. It’s been quite a while since Kristina was in PC, so Alexis will make a solid pitch for a return.

GH fans can expect Kristina and Alexis to reconnect, but that won’t be the only reason for Kristina’s comeback. There must be more to the story. Will Kristina leave Parker (Ashley Jones) behind and get involve in a new love story? Could she become part of Alexis’ search for answers about her family history? There should be several ways to keep Kristina involved, so let’s hope she sticks around for a bit.

Are you anxious to see Kristina back home with her family? We’ll give you updates as other General Hospital news comes in. Stay tuned to the ABC soap and don’t forget to check CDL often for the latest General Hospital spoilers, updates and news.