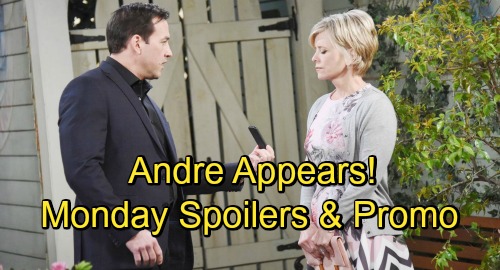 Days of Our Lives (DOOL) spoilers for Monday, August 13, tease that Chad (Billy Flynn) will have Abigail (Marci Miller) on his mind. Despite his outburst at the Horton house, Chad feels terrible about hurting his wife. Walking out on her was brutal for both of them, but Chad just can’t deal with Abby having Stefan’s (Tyler Christopher) child.

However, DOOL fans know Chad’s got it all wrong. Gabi (Camila Banus) changed the paternity test results, so Chad is the real “baby daddy.” Since he’ll remain in the dark for a while, Chad will continue to be tormented. He’ll even start dreaming about this kid, so he’s clearly stuck on the topic.

Days of Our Lives spoilers say Chad will drift off to sleep and imagine that the baby is his. He’ll be happy with Abigail for just a moment, but reality will hit when he wakes up. Chad still won’t be able to get past this, especially since Gabi (Camila Banus) will be around to poison him against Abigail.

In the meantime, Kate (Lauren Koslow) will have a dream of her own. She’ll be surprised when Andre (Thaao Penghlis) appears to her in the night. Days viewers know Kate and Andre had a complicated relationship, but there was definitely some love between them. Andre may have some valuable advice for Kate, so she’d better listen up!

Other Days spoilers say Steve (Stephen Nichols) will seek answers. He’s dying to know what Kayla’s (Mary Beth Evans) keeping from him, so he’ll just come right out and ask her. Steve will urge Kayla to confess and let him help her with her burden. He realizes she’s protecting him somehow, but he just won’t think that’s necessary. Steve will remind Kayla that they’re a team, so they need to act like one.

Unfortunately, Kayla won’t tell Steve the whole story. She’ll hide the details of her alliance with Stefan, so Steve will need a new tactic. He’ll launch an investigation and hopefully find out what Kayla’s so worked up about.