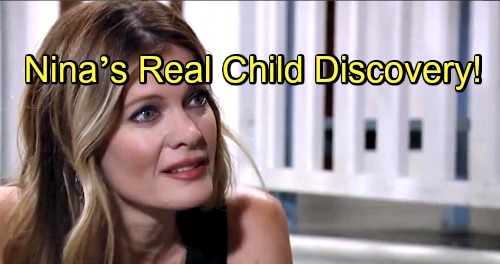 Once the truth about Valentin and Sasha’s deception comes out, Nina will need to find out who her real daughter is. Many GH fans suspected Kiki (Hayley Erin) would turn out to be Nina’s kid instead of Ava’s (Maura West). That would’ve been a great story, but Hayley Erin’s departure may have thrown off the plan.

There were some hints early on that indicated Kiki might’ve been the daughter in question, but GH seems to be pointing in another direction now. Perhaps they were forced to shift gears when Erin decided to leave the show. Sometimes exits throw the writes a curveball and they have to adjust.

Regardless, it’s doubtful General Hospital will make some sort of posthumous connection. Other than causing major conflict between Ava and Nina, making Kiki Nina’s daughter wouldn’t accomplish anything. Nina would still be left daughter-less, so what’d be the point? Nina and Ava already have a feud going anyway, which means it wouldn’t change much.

Besides, Ava will have her hands full with Ryan (Jon Lindstrom) and the aftermath of Kiki’s death. That’s enough of a storyline to play. If Kiki wasn’t really Ava’s daughter, the time for GH to reveal it would’ve been when she disowned her. Instead, this friction between them will end up being about regrets. Ava’s sure to be sorry she wasted these last few months at odds with Kiki.

As for Nina, her daughter hunt should be easier without Kiki in the picture. At least it’ll be that way for GH viewers! Willow (Katelyn MacMuller) is currently the top daughter candidate thanks to that fierce faceoff she had with Nina. General Hospital may have made them hate each other so they could shock them with a built-in bond later.

There’s a chance Willow’s the mysterious birth mom in the Wiley story, too. Nina overheard part of an odd Brad (Parry Shen) and Julian (William deVry) conversation once, so she could land at the center of all this. General Hospital spoilers say there’s be plenty of places to go with this Willow daughter angle.

We don’t have any other good options on canvas at the moment. Nelle (Chloe Lanier) could be a possibility, but Lanier isn’t interested in a long-term stay. It might be a waste to make her Nina’s kid. GH could always go off in search of another daughter and introduce a new character, but fans might object since we’ve already got Willow and Sasha.

Willow’s still at the top of the list for the time being, but we’ll see how it goes! Regardless, Kiki’s demise appears to count her out as Nina’s missing kid. We’ll give you updates as other GH news comes in. Stick with the ABC soap and don’t forget to check CDL often for the latest General Hospital spoilers, updates and news.