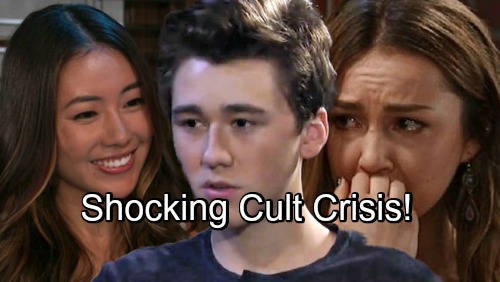 General Hospital (GH) spoilers tease that Kristina (Lexi Ainsworth) will get pulled into a world of trouble. However, she could actually end up doing some good – at least for Oscar (Garren Stitt)! He’s been struggling ever since he found out about his brain tumor, but he’s enjoying his new place. Oscar’s roommates don’t pressure him for major rent money and they’ve been very welcoming.

Daisy (Kelsey Wang) even came through for Oscar with an interesting technique. When he suddenly had a serious headache, Daisy helped him find a way to “heal himself.” Kristina was so impressed that she asked to learn more, so she got some literature from Daisy. General Hospital spoilers say Kristina will read this book and set herself up for some shockers. It seems obvious that this is a cult.

Like Oscar, Kristina is awfully lost and vulnerable right now. She’s not dealing with a cancer diagnosis, but she still feels stuck. Daisy seems to be targeting the weak and needy, so Oscar and Kristina are the perfect candidates. Once Kristina reads Every Day Is a New Dawn, she may decide to make some big changes. Kristina could see the light – or the light this cult wants her to see.

It’s easy to imagine Kristina moving out of Sam’s (Kelly Monaco) penthouse and joining Daisy’s band of misfits. That could put her in the position to save Oscar from danger. Daisy was all about self-help, so there may be other remedies she wants to try. Oscar could turn to some potentially dangerous drugs in hopes of healing himself. He’s bound to have worse and worse symptoms in the coming months.

Even if Oscar’s just convinced doing nothing is the right call, that’s dangerous on its own. Doing nothing is a surefire way for Oscar to die. He desperately needs that clinical trial and he can’t get on board with the self-help guru turning him against it.

Kristina might secure a confession from Oscar as things grow increasingly dire. Can she convince him that the experimental treatment is the for the best? Regardless, these two may be in pretty deep. What happens when they inevitably want out of this cult? Oscar and Kristina may find that task more difficult than they expected. GH fans can expect some tricky situations before all this wraps up.

General Hospital spoilers say some stunning drama’s in the works. Will Kristina ride the rescue and find a sense of purpose? Will she be crucial in helping Oscar get the treatment he needs? We’ll give you updates as other GH news comes in. Stay tuned to the ABC soap and don’t forget to check CDL often for the latest General Hospital spoilers, updates and news.