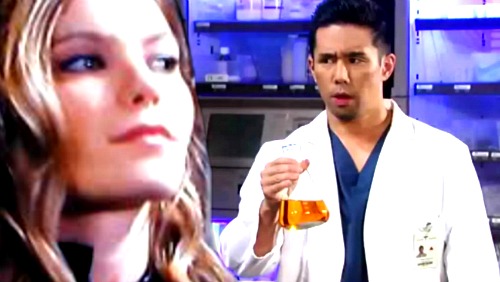 General Hospital (GH) spoilers tease that Nelle’s (Chloe Lanier) plot against Carly (Laura Wright) will continue and it’s sure to bring more shockers. However, Nelle may have cooked up another sneaky plan. GH recently offered an interesting clue, so it’s worth digging deep to figure out what it means.

Nelle sat down at Kelly’s and noticed Brad (Parry Shen) nearby. She was quick to greet him and engage in a warm chat. Since when are Brad and Nelle so chummy? What’s up with this insta-friendship? There has to be more to the story here. General Hospital must be keeping secrets!

When Griffin (Matt Cohen) sought help with a rushed paternity test, Brad was reluctant to get involved. Since he’s in the process of adopting a baby with Lucas (Ryan Carnes), Brad suggested that he wanted to keep his hands clean. However, his new outlook can’t erase past sins. Brad has a shady history and there’s just no getting around that.

Besides, Brad went through with the paternity test for Griffin despite his reservations. He’s obviously not THAT committed to his goal of avoiding trouble. Brad certainly could’ve been involved when Nelle needed a paternity test of her own.

On daytime dramas, it’s rare to get accurate DNA results the first time around. Test tampering is pretty much the norm in the soap world. We also have to remember that Nelle got $10,000 for her Ask Man Landers tip to The Intruder. Nelle might’ve used some to get artificially inseminated and the rest as a little bonus for Brad’s assistance.

Brad wouldn’t have minded some extra cash to cover adoption fees and baby prep. If Nelle knew his reputation beforehand, she might’ve sensed that he was a kindred spirit. They’re both notorious schemers, so their friendship makes sense.

Nelle’s a smooth talker who could’ve easily convinced Brad to pitch in. Her pregnancy always seemed a bit fishy to be honest. It may have been Nelle’s last-ditch effort to keep Michael. Trapping him with another man’s baby sounds right up her alley.