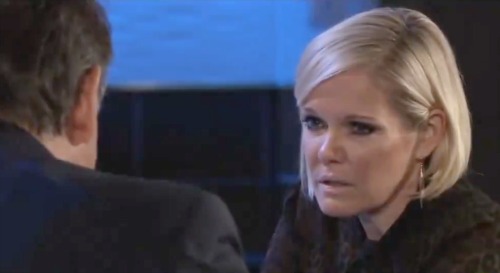 General Hospital (GH) spoilers tease that Ava (Maura West) may unwittingly help unleash some dark forces onto Port Charles. Ava’s been seeing “Kevin” (John Lindstrom) for therapy lately, to help her with her feelings related to Kiki (Hayley Erin) and Griffin’s (Matt Cohen) betrayal. Of course, Ava sought therapy to help her cope and come to terms with what had happened in a positive, constructive way.

What she doesn’t know is that her therapist is none other than Ryan (Jon Lindstrom), a sociopath killer, who is impersonating Kevin. And Ryan is taking a different tactic than most therapists in that he’s enjoying every moment of Ava’s own dark psyche. In fact, he’s been encouraging her to nurture her rage, anger, and desire for revenge.

In Ryan and Ava’s sessions, you can practically see the wheels turning in Ryan’s head as Ava discusses how her own daughter betrayed her and her growing hatred for both Kiki and Griffin. He relishes in Ava’s darkest feelings and even insinuated during a recent session that Ava consider killing Kiki. Of course, Ava took it as a joke and as some sort of “reverse psychology,” but it was pretty clear that Ryan was serious deep down.

Ryan has long been fixated on Felicia (Kristina Wagner) and probably always will be, but it’s interesting to watch his new obsession over Ava grow and develop. But what will his next move be? He seems very keen on continuing his sessions and proximity to Ava. Will his feelings for Ava become romantic?

There’s been speculation that Kiki may become Ryan’s victim, and if that’s the case, that would indicate that Ryan will probably develop romantic and protective feelings for Ava. In his warped mind, he may think that getting rid of Kiki will help Ava and right the wrong that’s been done to her. But he’ll also enjoy watching Ava grieve and he may even be the one to help her through the grief process.

Do you think that Ryan will become infatuated with Ava, like he is with Felicia? Stay tuned to the ABC soap and don’t forget to check CDL often for the latest General Hospital spoilers, updates, and news.