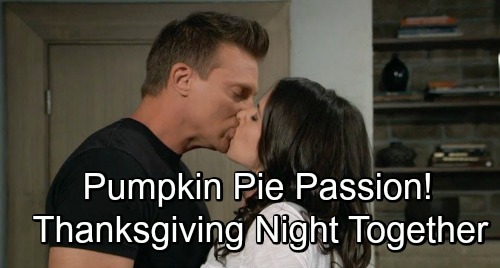 General Hospital (GH) spoilers tease that a passionate Thanksgiving might be ahead for Jason Morgan (Steve Burton) and Sam McCall (Kelly Monaco). GH spoilers say they plan a Thanksgiving with their own family, this probably means Danny (T.K. Weaver) although it’s possible Jake (Hudson West) and Scout (Palmer and Poe Parker) could be there also.

They will intend for it to be Thanksgiving Day celebration only but General Hospital buzz claims that they will be forced to spend the night together as well. Could this mean a blizzard for Port Charles that may snow them in?

Jason’s been back in town for a year now, and JaSam fans are getting tired of waiting for something to happen! There have been many “on the verge” moments when fans thought for sure that sparks would ignite a roaring romance fire between the former supercouple, but they’ve never quite gotten to the “good stuff” yet.

Sam had excitement and passion with Jason, but stability and security with Drew. Drew didn’t love her just because of his Jason memories, either, he loved her for herself. Plus Drew never put Sonny and Carly Corinthos (Maurice Benard, Kelly Monaco) first – it was always Sam and the kids.

But maybe with Jason in a family setting – THEIR OWN FAMILY – and being stuck together all night, Sam may feel safer letting things restart between them. After all, Jason’s never been a family man, and even a family Thanksgiving is a huge thing for him.

So will Jason and Sam’s Thanksgiving Day give something for JaSam fans to be thankful for, or will it just turn out to be another turkey? Stay tuned to General Hospital and check CDL for General Hospital spoilers, news and features frequently to see if the sparks turn into a fire between Jason and Sam!