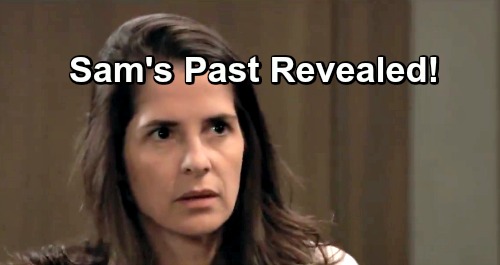 General Hospital (GH) spoilers tease that Sam McCall’s (Kelly Monaco) past may be coming back to haunt her. On the GH episode of December 3, Sam received a large brown envelope with no return address. She was puzzled by this mystery envelope, so she opened it right up.

Sam was stunned to find Leland Powell’s obituary inside, so Alexis Davis (Nancy Lee Grahn) quickly pushed for more info. That’s when Sam dropped a major bomb! She revealed that Leland Powell was her husband, so it’s clear that some GH history is going to come into play.

Sam came across “The Dead Man’s Hand,” a set of poker cards allegedly held by Wild Bill Hickok when he died. These cards rightfully belonging to the Jacks family, so Sam got tangled up in plenty of drama with Jasper “Jax” Jacks. Sam also made money years ago by using aliases and marrying wealthy men. She conned them out of their fortunes, so Sam’s definitely got a past that she’s not proud of.

Even though “Powell” was not among Sam’s aliases and “Leland Powell” is not named in any GH historical recaps or accounts, he must have been one of those husbands. General Hospital must be rewriting things a bit or at least adding to the story.

Now that this mysterious obituary as appeared, it sparks several questions. Who sent this obituary to Sam? How did the sender get Sam’s address and real name? Why is Sam being targeted? Leland’s death may have set something dangerous and destructive in motion!

General Hospital spoilers hint that Sam will use her investigative skills and follow the trail. She’ll get some help from Curtis Ashford (Donnell Turner) and Jason Morgan (Steve Burton), so let’s hope answers aren’t too far off. We’ll give you updates as other GH news comes in. Stay tuned to the ABC soap and don’t forget to check CDL often for the latest General Hospital spoilers, updates and news.