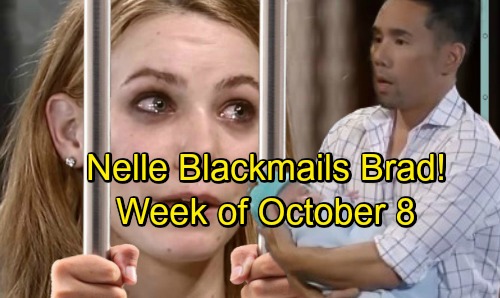 General Hospital (GH) spoilers tease that Brad (Parry Shen) could be in serious trouble. He should’ve known better than to get mixed up in Nelle’s (Chloe Lanier) crazy world. Brad had finally ditched all the scheming and was prepared to become a family man. He just wanted to take Wiley home and happily raise him with Lucas (Ryan Carnes).

Unfortunately, Wiley’s tragic death opened the door to a baby swap. When Nelle offered up a healthy Jonah to Brad, he really should’ve turned her down. Brad and Lucas still could’ve had their happy family someday. It would’ve taken some time, but another adoption could’ve been in the works eventually. It’s not like Wiley’s death was Brad’s fault.

However, Brad let Nelle talk him into it and now he’s paying the price. General Hospital spoilers say the pressure’s about to get even worse! It looks like Nelle’s headed back to GH during the week of October 8-12. Word has it Nelle may get a visit from Brad as well as “Wiley,” so she may request it.

Of course, this would really be more of a demand. Brad certainly wouldn’t want to anger Nelle in any way. She could blow everything if she blabs to Michael (Chad Duell), so Brad would be better off keeping her content. Sadly, that’s easier said than done.

Nelle is undoubtedly miserable behind bars. She’d rather be out in the world finding her next victim and plotting to get big bucks. After all, those seem to be Nelle’s favorite pastimes. Nelle also wouldn’t mind causing another round of Corinthos chaos. You can bet she wants revenge after getting locked up.

Nevertheless, scoring her freedom may be at the top of Nelle’s to-do list. Could she blackmail Brad into helping her? Nelle must be getting desperate at this point. She tried getting Kim (Tamara Braun) to blame her horrible behavior on hormones. That plan didn’t work, so Nelle needs another one. She may want Brad’s assistance with it.

Nelle might tell Brad that if he wants to keep “Wiley,” he’d better get her out of prison. Brad would protest that he doesn’t have any connections, but Nelle may not care. She might suggest that where there’s a will, there’s a way. Nelle could argue that Brad will have a reason to get creative.

What could Brad do about this threat? Julian (William deVry) really needs to steer clear of legal drama, but he’s Brad’s only real ally. Could Brad come clean about the rest of the story and convince Julian to help him? If they could dig up dirt on the judge, maybe they could get the ruling overturned. There might be something in his or her past that would make the judge unfit for this case.

Then again, perhaps there’s some legal loophole that’s been overlooked. Brad and Julian would have to be careful about keeping their involvement a secret, but it’s a risk they may have to take. General Hospital spoilers say Nelle will continue to cause issues, so don’t miss the turmoil ahead.

Are you excited to see what’s next in this shocking storyline? We’ll give you updates as other GH news comes in. Stay tuned to the ABC soap and don’t forget to check CDL often for the latest General Hospital spoilers, updates and news.