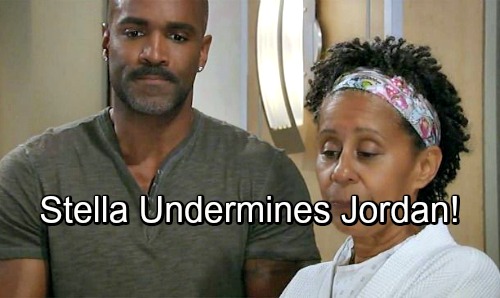 General Hospital (GH) spoilers tease that Stella (Vernee Watson) has at least one more trick up her sleeve. She’s pretending to accept Curtis (Donnell Turner) and Jordan’s (Vinessa Antoine) engagement, but she’s secretly cooking up a sabotage plot. Stella would do just about anything to tear these two apart, so expect some bold moves.

On June 18, Stella called up an old friend named Shondra. The conversation revealed that Shondra also knows Curtis and happens to live near Port Charles. It’s easy to see where General Hospital’s going with this. There’s a good chance this old friend is actually Curtis’ former flame. If not, Stella certainly hopes they’ll hit it off soon!

Perhaps Stella set Curtis and Shondra up once upon a time. If one or both of them moved away, they might’ve called it quits early in their romance. Maybe there was an instant attraction, but life just got in the way.

Shondra seemed on board when Stella suggested getting together. Has she been pining for Curtis or does she really think this is will be a friendly gathering? Either way, Stella will undoubtedly play Cupid. She’d much rather see Curtis with Shondra than Jordan the cheater. Jordan hurt Curtis’ brother Tommy by betraying him with Shawn Butler (Sean Blakemore), so Stella must think Curtis is at risk, too.

Stella could take this GH scheme a step further than traditional matchmaking. No one knows what kind of person Shondra might be. How low will she stoop to make Curtis her man? Stella might convince Shondra that she still has a shot, but only if she gets Jordan out of the way. Telling bogus secrets or even real ones could help with that plan.

Jordan has already battled doubts about this marriage, so it wouldn’t take much to put it in jeopardy. She might bolt at the first sign of trouble – and you can bet Shondra will be trouble if Stella has anything to say about it. Stella clearly isn’t summoning Shondra to congratulate the happy couple!