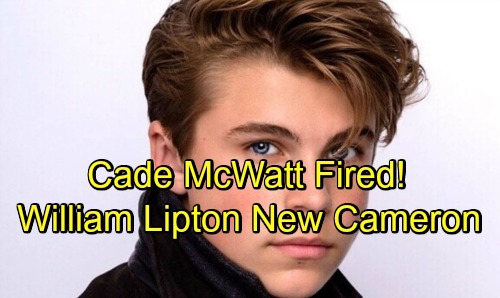 General Hospital (GH) spoilers tease that the ABC soap is making an abrupt casting change. GH fans know they recently aged Cameron a bit and brought a new actor in. Cade McWatt took over the role, but he’s only had a couple scenes so far. Unfortunately, it seems GH determined McWatt wasn’t the right fit. He seemed pretty green, so they’re shifting gears and going with another recast.

According to the latest issue of Soap Opera Digest, GH has already found their new Cameron. William Lipton will take McWatt’s place, so it should be interesting to see his spin on Cam. General Hospital undoubtedly wanted to get this right. They put Eden McCoy (Josslyn) on contract with the goal of giving her more airtime and a bigger story. That’ll naturally involve a love triangle.

Of course, that means Joss needs two solid options to choose from. General Hospital fans seem to have mixed feelings about Garren Stitt as Oscar, but he’s doing pretty well overall. He definitely pulls off that sweet Wally Cleaver vibe. Oscar’s a good kid and Stitt is able to convey that.

For Cameron’s side of this triangle, General Hospital needs someone a little edgier. McWatt had the look, but that’s not enough in the soap world. GH was looking for something more and they hopefully found it in Lipton’s portrayal. He’ll surely serve as the brooding bad boy who poses a threat to Oscar.

They can’t keep sliding actors in and out of the role, so this is probably the final Cam recast for a while. Lipton can settle in and focus on telling the teens’ next story. General Hospital spoilers say Josslyn will remain a real handful for Oscar. He’ll try to keep this romance together, but Joss will definitely make that difficult.

As time goes on, Josslyn may believe Cameron would be a better match. At least he’ll think so! Cam could rev up his efforts to win Joss over and make an enemy out of Oscar in the process. The teen scene will bring some exciting drama, so don’t miss what’s in store.

What do you think about this sudden recast? Are you on board with the love triangle that’s shaping up for Josslyn? We’ll give you updates as other GH news comes in. Stay tuned to the ABC soap and don’t forget to check CDL often for the latest General Hospital spoilers, updates and news.