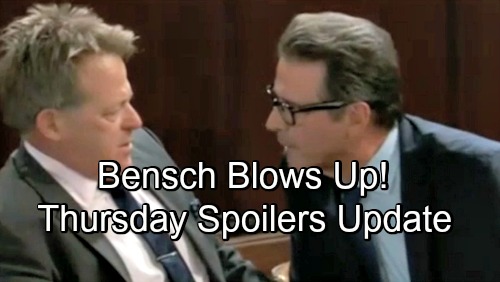 General Hospital (GH) spoilers update for Thursday, August 9, tease that Curtis (Donnell Turner) and Jordan (Vinessa Antoine) will push pause on all the usual drama. There’s been a lot going on in town, especially at the PCPD. However, Jordan will manage to sneak away for a while. She’ll come up with a romantic plan and give Curtis the attention he’s been waiting for.

After a sex session, Curtis will suggest that he’d like to do this on a regular basis. They’re headed toward the altar, but Curtis won’t want to let the passion fade. He’ll hope they can keep the fire in their relationship, even after they’re an old married couple. Let’s just hope they actually tie the knot!

Other General Hospital spoilers say Ava (Maura West) will ask for a word with Liz (Rebecca Herbst). She’s on the verge of learning the Griffin (Matt Cohen) and Kiki (Hayley Erin) hookup shocker, so we’ll see some tense moments. Ava will get some hints and put it all together soon, but she’ll hold back until the time is right. Kiki and Griffin are going down when they least expect it.

For now, Franco (Roger Howarth) will focus on the task at hand. He needs to explain the one-night stand situation to Alexis (Nancy Lee Grahn), but he’ll only cause more problems. It’s possible Franco will be responsible for Ava learning the truth. There’s also a chance his attempt to tell Alexis won’t turn out the very well. Bottom line, Franco will botch this and that’ll bring some consequences.

When Kiki testifies, she’ll get all riled up over Dr. Bensch (James DePaiva). Kiki will shout that he can’t keep doing this. She’ll declare that it’s not right as tears fill her eyes. Alexis will undoubtedly be pleased by Kiki’s genuine, emotional response to her experience. That could help swing the case in Kiki’s favor, especially since Scott (Kin Shriner) will be sabotaging himself every step of the way.

GH spoilers say Scott’s incompetence will infuriate Dr. Bensch. He’ll ask his lawyer’s trying to throw the case. A nervous Scott will likely bounce back a bit to keep up appearances. He can’t risk getting disbarred over an ill-advised scheme for Ava.

Meanwhile, a surprising crash will disrupt Sonny (Maurice Benard) and Carly’s (Laura Wright) bliss. Carly just scored her freedom, so she planned to enjoy some peace and quiet at home. Unfortunately, it seems Mike (Max Gail) may spoil the tranquility. He may be the one who causes the commotion and breaks something nearby.

Stella (Vernee Watson) warned Sonny that he’d have to put Mike in a facility eventually. Sonny will probably realize that day’s coming sooner than he’d like. General Hospital spoilers say the Corinthos clan will face more devastation, so stay tuned for some breakdowns and outbursts.

It sounds like Thursday’s episode will be packed with action. We’ll give you updates as other GH news comes in. Stick with the ABC soap and don’t forget to check CDL often for the latest General Hospital spoilers, updates and news.