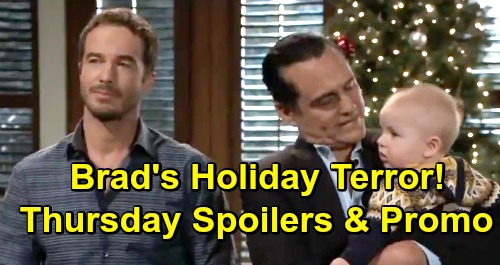 General Hospital (GH) spoilers for Thursday, December 20, tease that Chase (Josh Swickard) will continue to show interest in Willow (Katelyn MacMullen). He’ll hope to keep things moving in the right direction, but Willow’s been playing hard to get. She’ll once again make his flirting efforts difficult, so Chase will have to hang in there and stay focused on his goal.

Meanwhile, Julian (William deVry) will reassure Brad (Parry Shen). As usual, Brad will be working himself into a tizzy over “Wiley” and the baby swap secret. His guilt and fear will rev back up, but Julian will insist he should stop torturing himself and just enjoy his family. Brad will do his best, but it won’t be easy with Michael (Chad Duell) around.

General Hospital spoilers say we’ll see a small gathering in Thursday’s new GH episode, December 20. Michael will declare it a celebration of “Wiley,” so it sounds like he’ll try to put his grief on hold and focus on joy this Christmas. There’ll be time for Michael to mourn again later, but he’ll want to cuddle the kid and see that cute smile for now.

At the police station, Liesl Obrecht (Kathleen Gati) will remain confident. Anna (Finola Hughes) may argue that Dr. O will never wiggle out of this, but Liesl will suggest that you should never say never. She’s got serious dirt on Valentin (James Patrick Stuart), so she’s still hoping he’ll come through and secure her release.

Valentin pressured Peter (Wes Ramsey) to let Liesl off the hook, which is exactly what he’ll end up doing. However, Peter’s decision will only be about Maxie (Kirsten Storms) and her wishes. During their next chat, Maxie will admit that Nathan (Ryan Paevey) wouldn’t want him mom in prison. She’ll be grateful when Peter shows mercy and helps get the charges against Liesl dropped.

Other General Hospital spoilers say Valentin will panic. Thursday’s preview video shows Nina snarling, “She told me everything…everything!” Valentin will look shocked, but perhaps this confrontation isn’t what it seems to be.

Nina just decided to reunite with Valentin and sealed the deal by making love to him. Does GH really intend to derail their reunion so fast? It’d be better to stretch this out and rebuild their relationship completely before destroying it again.

Although it’s possible Liesl will betray Valentin despite getting her freedom, she probably wouldn’t want to hurt Nina with the fake daughter bomb. Instead, Valentin may simply have a nightmare thanks to his guilty conscience. Now that Nina has finally given him what he wants, Valentin should become even more terrified of exposure.

Regardless, General Hospital has some stunning moments in store. We’ll give you updates as other GH news comes in. Stay tuned to the ABC soap and don’t forget to check CDL often for the latest General Hospital spoilers, updates and news.