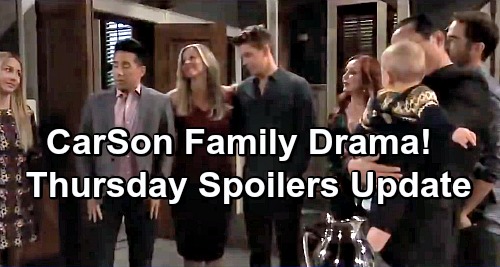 General Hospital (GH) spoilers for Thursday, December 20, tease that Liesl Obrecht (Kathleen Gati) will await good news. After the threat she delivered to Valentin (James Patrick Stuart), Liesl fully expects to walk free. She understands how much Valentin wants to be with Nina (Michelle Stafford) and that divulging his fake daughter scheme would bring major destruction.

Valentin was able to break through that last barrier and get back together with Nina on Wednesday. However, their reunion may or may not be in jeopardy. Thursday’s GH preview clip features Nina lashing out at Valentin. She makes it clear that she knows everything now, but there’s a good chance this is all a horrible dream or fantasy.

Meanwhile, Peter (Wes Ramsey) and Maxie (Kirsten Storms) will discuss Liesl’s fate. Maxie will bring up Nathan (Ryan Paevey) and how he wouldn’t want his mom behind bars. She’d appreciate it if the cops went easy on Liesl, so Peter will push for her charges to be dropped. That seems fair Peter didn’t land in prison for his mistakes either!

Other General Hospital spoilers say Chase (Josh Swickard) will chat with Willow (Katelyn MacMullen) again. He’ll hope their romance is headed somewhere, but Willow won’t make it easy. She tends to misread Chase’s intentions, so it’s been a struggle to woo her. Nevertheless, part of Willow is charmed by Chase and she’ll stay interested enough to keep things going for now.

In the Corinthos home, a small holiday bash will get underway. Sonny (Maurice Benard) and Carly (Laura Wright) will bicker over Margaux (Elizabeth Hendrickson) again, but they’ll have to settle down for the festivities. Bobbie (Jacklyn Zeman), Josslyn (Eden McCoy), Brad (Parry Shen), Lucas (Ryan Carnes), Michael (Chad Duell) and “Wiley” will also be there to celebrate.

Michael will want to make “Wiley” the focus of all the Christmas fun. He’s looking for some joy in his life right now and he’s found it in this little one. Of course, Michael doesn’t realize “Wiley” is actually his own flesh and blood.

Brad will remain paranoid that Michael’s going to find out, but he’ll get some reassurance from Julian (William deVry). Although Julian doesn’t know “Wiley” is Jonah, he knows a swap went down and Brad’s terrified about it. Julian will urge Brad to relax and stop worrying himself sick over all this. He’ll think it’s time for Brad to finally accept what’s happened and just concentrate on being a family.

Other General Hospital spoilers say Sam (Kelly Monaco) will ponder another mysterious message. “Linda Black” will keep those emails coming, so Sam will rely on Jason (Steve Burton) to help her sort out the mess. It sounds like this case will certainly take some hard work and patience!

GH viewers won’t want to miss the twists and turns ahead. We’ll give you updates as other details emerge. Stick with the ABC soap and don’t forget to check CDL often for the latest General Hospital spoilers, updates and news.