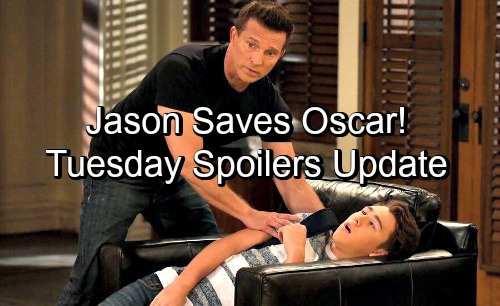 General Hospital (GH) spoilers update for Tuesday, August 28, tease that Lucas (Ryan Carnes) will fret about the battle for “Wiley.” He’s actually been bonding with Michael’s (Chad Duell) son, but he’s not in the loop on the baby swap yet. For now, Michael will keep mourning the loss of Jonah and Lucas will keep worrying about the custody case.

At GH, Alexis (Nancy Lee Grahn) and Lucas will discuss what’s ahead. The judge will decide who should raise “Wiley” within a few hours, so Lucas will be incredibly nervous. He’ll realize their chances are slim, but he’ll still hope they can somehow keep their family intact.

Meanwhile, Julian (William deVry) will have surprising news for Brad (Parry Shen). He’ll admit that reached out to the birth mom, so Brad will wonder what’s going to happen. That move could backfire, but Julian won’t seem concerned. He’ll assure Brad that things are going to work out, so “Brucas” may get some positive updates soon.

Speaking of updates, Kim (Tamara Braun) will have some on Tuesday’s new GH episode, August 28, as well. She’ll seek out Michael and state that there’s something he should know. General Hospital spoilers say Kim will have information on Nelle, so this is probably regarding her health. Some post-birth complications may have come up.

A prison beating is another option, but the damage would probably involve pregnancy-related parts of the body. Since Kim knows what’s up, it makes sense that this ties to her job as an OB-GYN.

Michael wants to put that chapter of his life behind him, but he should still be grateful for Kim’s info. He had a child with Nelle, so a teeny-tiny piece of him may want to know about her health issues.

Elsewhere, Curtis (Donnell Turner) will disagree with Valentin’s (James Patrick Stuart) plan. He’ll argue that Nina (Michelle Stafford) should know about the search for her child, but Valentin will insist on keeping it a secret.

Despite Curtis’ pleas, Valentin will feel like spilling this shocker could spell disaster. He’ll be adamant that Nina can’t know until her daughter’s been found.

Other General Hospital spoilers say Nina will have an argument of her own. As she sits with Diane (Carolyn Hennesy), Nina will voice her complaints. She’ll have major issues with something Diane brings up, so Madeline’s (Donna Mills) parole hearing could come into play. That’s definitely something Nina would be against. 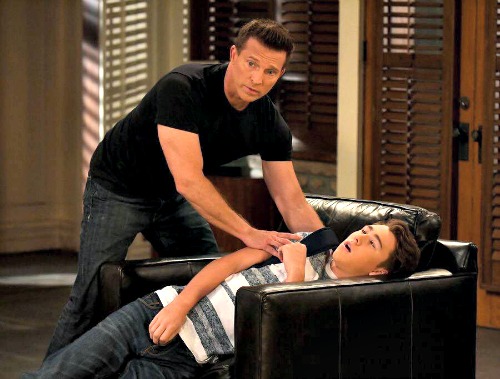 Across town, Sonny (Maurice Benard) will have a difficult conversation. He’ll reveal that he’s made a choice regarding his father’s care, so Carly (Laura Wright) and Jason (Steve Burton) will be brought up to speed.

Sonny’s starting to understand that Mike (Max Gail) needs a well-equipped facility. He may admit that to his loved ones and seek their support.

General Hospital spoilers say Oscar (Garren Stitt) will have a horrifying incident in the Corinthos living room. Oscar’s visit certainly won’t turn out like he expects. As for Oscar, he’ll get some much-needed help from Jason the hero!

The latest reports and photos released from ABC say that Oscar will have a seizure at Sonny’s house. In any case it appears that Jason will step up and take care of Oscar until help arrives.

At Ferncliff, General Hospital will fill fans in on which twin is which. Ryan (Jon Lindstrom) is back in the picture, but is he the patient or the doc? There’s far more at stake if the real Kevin is stuck in that padded room. That would mean Ryan’s been duping all of Port Charles!