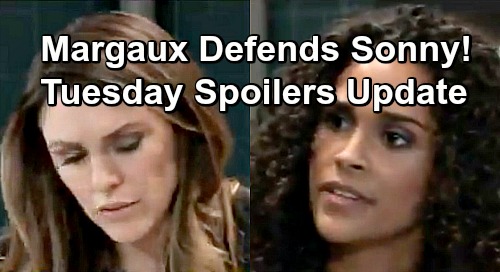 General Hospital (GH) spoilers for Tuesday, December 18, tease that Sonny (Maurice Benard) will defend his father and push for peace. He’ll hope to keep the cops out of Mike (Max Gail) and Yvonne’s (Janet Hubet) current situation. They’ve disappeared at Turning Woods, but perhaps they haven’t gone far. Sonny might think the staff should have a look around before they give the police a call.

Of course, Marcus (Nigel Gibbs) will blame Mike and contend that the authorities absolutely need to be notified. This will give him one more reason to hate Mike and Yvonne’s connection. While Carly (Laura Wright) gets caught in the middle of all that, Jason (Steve Burton) and Sam (Kelly Monaco) will get a new lead. “Linda Black” will send the next email, so “JaSam” will dive deeper into the mystery.

The person responsible for these messages knows crucial things about Sam’s past – like this alias Sam used once upon a time. Her fears will grow, but Jason will try to quiet them. He’ll promise that he’s got Sam’s back and will help her put this nightmare to rest.

Over with Kristina (Lexi Ainsworth), she’ll hope to rope Valerie (Brytni Sarpy) into something. Kristina will want Valerie to trust her, but Val won’t look so sure this is a good idea. Nevertheless, Valerie may decide she’s in after a little coaxing. Kristina’s sinking further and further into cult drama, so we’ll see if her plans involve Daisy (Kelsey Wang) and DOD.

However, Margaux won’t want to make this a big deal. She’ll argue that her new lead simply doesn’t concern Sonny and that’s that. Margaux won’t be giving Jordan all the facts, but that’s all the commissioner needs to know for now. Of course, GH fans can see the writing on the wall. Margaux and Sonny could be heading for an affair if this keeps up!

Over with Franco (Roger Howarth), he’ll stun Liz (Rebecca Herbst) with updates on Cameron’s (William Lipton) lies. Franco found out there was no bake sale and Cam certainly didn’t join drama club. He also discovered some troubling texts regarding Cameron’s drug deal, so Franco will want to fill Liz in.

There was no pot in the brownies and Cam called off the deal, but his problems are far from over. Cole (Nick Alvarez) the drug dealer will pressure Cameron in Tuesday’s GH episode. He’ll feel like Cameron’s been wasting his time, so he’ll push him to make the transaction. It looks like Cameron will either do it or at least get caught up in Cole’s mess somehow.

General Hospital spoilers say Cameron will end up stuck at the PCPD later, so Liz will get a disturbing phone call from the cops. Finally, Chase (Josh Swickard) will put Lulu (Emme Rylan) in her place. He’ll be tired of her attempts to pry murder case info out of him, so he’ll do his best to shut her down.

Lulu’s quest for a hot scoop will get a bit tougher, but she won’t give up! We’ll keep you posted as other GH news comes in. Stay tuned to the ABC soap and don’t forget to check CDL often for the latest General Hospital spoilers, updates and news.