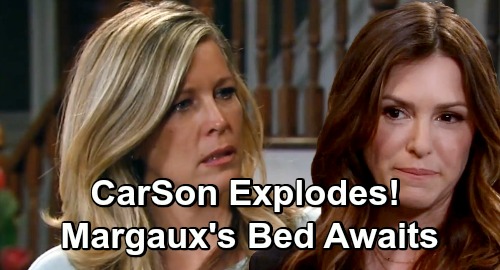 General Hospital (GH) spoilers tease that Carly (Laura Wright) will need to do some venting. She’ll track Jason (Steve Burton) down on December 19 and unload all her frustration. Jason is used to his bestie’s outbursts by now. He’ll gladly listen to all Carly’s concerns and offer advice if he can. Jason will want Carly to know he’s going to be there for her no matter what.

Carly may need Jason more than ever down the road. General Hospital spoilers point to major trouble in Carly and Sonny’s marriage. That could be part of the reason Carly feels the need to rant. She might still be stuck on Margaux (Elizabeth Hendrickson) and how Sonny’s underestimating her. Carly won’t want Sonny to get in over his head and put their family at risk.

Of course, Carly will struggle with some other issues as well. Ava’s (Maura West) vitriol could be another reason why Carly opens up to Jason. She’ll want to cut Ava some slack because of her loss, but it’ll be tough since they’re such strong foes. Carly will also have to worry about Josslyn (Eden McCoy) and the Oscar (Garren Stitt) situation, so stress levels will be running high.

Sonny will have enough on his plate with Mike’s (Max Gail) interest in a married woman. Marcus’ (Nigel Gibbs) wife, Yvonne (Janet Hubert), has caught Mike’s eye and that can only bring drama. This senior citizen love triangle will leave Sonny stuck in a nightmare, but at least it’ll be better than all the Croton chaos. Sonny will be glad that Margaux’s putting her grudge to rest.

Unfortunately, “CarSon” will face conflict instead of standing together through their problems. It’s possible that Carly will add fuel to the fire of the Yvonne crisis. Sonny may feel like Carly needs to step back and let him handle this. The same goes for handling Margaux. Sonny won’t want Carly poking the bear and reigniting Margaux’s outrage.

General Hospital spoilers say Carly and Sonny will have a tense fight on December 20. It sounds like their love story is headed into a dark chapter. Sonny and Carly have been down this path before and it’s not pretty. Sadly, it looks like a cheating scandal is about to rock this couple.

Sonny’s being far too sweet with Margaux and Marguax’s being far too forgiving in return. GH appears to be setting the stage for a deep betrayal. We’ve got Margaux and Sonny’s growing connection along with loads of “CarSon” conflict. It’s probably just a matter of time until Sonny ends up in Margaux’s bed. General Hospital has given us the perfect storm for a shocking affair!

Do you hope this ends Carly and Sonny for a while? Would you like to see them with new love interests just for the sake of change? Are you hoping their marriage survives this instead? We’ll give you updates as other GH news comes in. Stay tuned to the ABC soap and don’t forget to check CDL often for the latest General Hospital spoilers, updates and news.