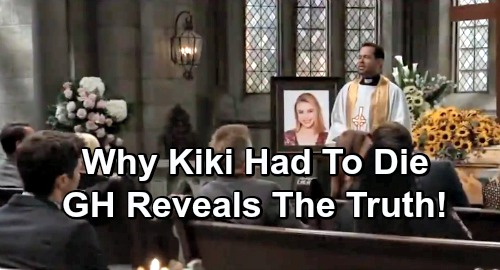 General Hospital (GH) spoilers tease that Kiki’s (Hayley Erin) death will continue to bring drama and affect the lives of several major characters. Losing Kiki was tough, but at least GH fans are being treated to a gripping storyline. Sometimes the loss is worth it, which is what the show decided in this case.

In an interview with Soap Opera Digest, one of GH’s co-head writers weighed in on this difficult choice. Shelly Altman spoke out about Erin’s departure and why they determined death was the right exit for Kiki. As you might expect, it wasn’t an easy decision. Once they knew for sure Erin couldn’t fit GH in her schedule anymore, they had to make a firm plan.

Kiki could’ve left town to get away from Ava (Maura West) or found some new medical program to be part of in another city. There were undoubtedly other excuses they could’ve come up with, too. The show had plenty of possibilities, but there’s one that they shut down from the get-go. “We didn’t consider a recast,” Altman admitted.

That meant they had to decide whether Kiki would live off screen or face a grim fate. They obviously went with the latter and for a very good reason. “There were many options, but the timing and the story we were telling with Ryan just really worked and it was important to us that one of Ryan’s victims be someone who mattered quite a bit to a lot of different people…” This statement makes us ask exactly whom did Mary Pat (Patricia Bethune) matter to in Port Charles?

Kiki’s death seemed like a no-brainer since she had so many connections in Port Charles. Of course, this devastating demise has hit Ava (Maura West) the hardest. West is knocking this material out of the park, so maybe that also played a role in this choice. Daytime Emmy wins create great buzz for soaps and West is already becoming a frontrunner for the lead actress category with her recent scenes.

As for Erin, Altman had some sweet parting words. Erin has been hard at work on Freeform’s Pretty Little Liars spinoff, so her General Hospital family is rooting for her. “We are very happy for Hayley,” Altman said. “Obviously, we will miss her, but…we wish her the absolute best.”

Do you agree with the decision to kill off Kiki? Do you think Kiki had to die for drama’s sake? General Hospital spoilers say Kiki’s funeral will begin on Monday, December 10, so tune in for a tearful goodbye. We’ll give you updates as other GH news comes in. Stick with the ABC soap and don’t forget to check CDL often for the latest General Hospital spoilers, updates and news.