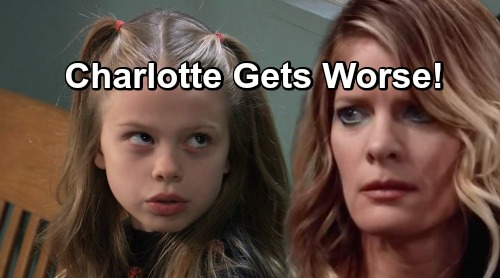 General Hospital (GH) spoilers tease that Charlotte (Scarlett Fernandez) could soon be suffering some serious consequences for her at-school bullying of Aiden (Jason David). Charlotte’s teacher Ms. Tait (Katelyn MacMullen) recently suggested the possibility of sending Charlotte to a school with a more traditional approach to discipline if her behavior doesn’t improve.

Lulu (Emme Rylan) and Valentin (James Patrick Stuart) have barely broached the subject of Charlotte’s bullying with her, and when they did, Nina (Michelle Stafford) was a bit of a roadblock in the progress. Nina refuses to believe that Charlotte has a problem, and her denial is causing all sorts of problems.

First off, Nina derailed the initial meeting with Ms. Tait about Charlotte’s bullying by trying to bully Ms. Tait. Thankfully, Ms. Tait stood up to Nina, but still Nina was rude and condescending to her. Then, Nina basically endorsed Charlotte’s behavior by insisting that Charlotte was just being a strong, independent little girl. And then Nina interfered with Lulu and Valentin’s attempt to correct Charlotte’s behavior.

Clearly, Nina is causing problems when it comes to dealing with Charlotte’s behavior, but could she also be the root cause of Charlotte’s behavior? Children often learn by observing, and Charlotte has spent a lot of time with Nina over the years. Nina is a great person, but she does like to get her way and often sees to it that she does. Perhaps Charlotte has picked up some of her behavior from Nina.

Of course, this isn’t to say that Nina runs around bullying people right and left. She doesn’t, but she may have inadvertently fostered some behaviors in Charlotte that Charlotte ran with and that have since gotten out of hand. Chances are, if Nina saw firsthand the way Charlotte was treating Aiden, she wouldn’t approve.

At any rate, Lulu and Valentin are going to have to set some ground rules and impose consequences for Charlotte’s behavior, and time will tell whether Nina becomes a productive part of that process. Do you think that Nina has some responsibility for Charlotte’s bullying behavior? Stay tuned to the ABC soap and don’t forget to check CDL often for the latest General Hospital spoilers, updates, and news.