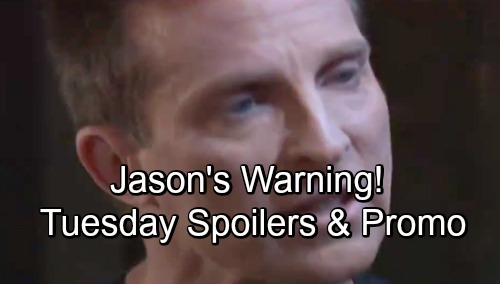 General Hospital (GH) spoilers for Tuesday, September 11, tease that Alexis (Nancy Lee Grahn) and Sam (Kelly Monaco) will have a disagreement. During a conversation at Sam’s place, Alexis will bring up her daughter’s new roommate. Sam invited Kristina (Lexi Ainsworth) to stay with her, but Alexis will insist that’s an invitation she’s going to regret.

It seems Alexis still has doubts about Kristina and her pattern of behavior. She may worry that Kristina will be more trouble than Sam anticipates, but Sam will just want to be there for her sister. Of course, Kristina will need her whole family’s support soon. Alexis is about to get a call regarding Kristina’s scary ordeal at Charlie’s Pub.

Kristina collapsed inside the building, but Jason (Steve Burton) thankfully rushed in to save her. He paused when Kristina told him to grab the wrench Mike (Max Gail) dropped, which allowed a bit of GH fake-out. The explosion we heard apparently wasn’t bad enough to cause major harm.

Later in Tuesday’s New GH episode, September 11, Jason will tell someone that he or she can’t say a word. He could be talking to Kristina, Sonny (Maurice Benard) or even Mike himself. Regardless, Jason will hope they can brush Mike’s secret under the rug. That could be tough after Chase (Josh Swickard) starts sniffing around.

General Hospital spoilers say Chase will talk to Julian (William deVry) about the gas leak. He’ll wonder if Julian’s absolutely sure of what caused it. Julian will undoubtedly reiterate that it was intentional. He feels confident Charlie’s Pub was sabotaged, so Chase will realize this is a crime scene investigation. GH fans can expect some exciting drama once Chase is hot on the trail.

As for Mike, he’ll have quite a meltdown. Sonny will do whatever he can to calm his dad down and keep him quiet. Let’s hope he’ll see the danger and move forward with Mike’s memory care facility plans. Across town, Franco (Roger Howarth) will leave Liz (Rebecca Herbst) annoyed. He’ll mention something that Liz believes she should’ve known about sooner, so expect some clashing.

While Liz and Franco work through their latest issues, Margaux (Elizabeth Hendrickson) and Drew (Billy Miller) will run into each other again. These two seem to cross paths constantly, which appears to be what Margaux wants. She’s eager to use Drew to her advantage, but there’s definitely some attraction under the surface, too.

Margaux will ask Drew to join her for a chat, but he’ll end up confiding in Sam later. It’s clear that Drew doesn’t trust Margaux, so he needs Sam more right now. With all the Oscar (Garren Stitt) problems he’s facing, Drew could really use Sam’s support.

The action’s heating up on General Hospital, so stay tuned for all the twists and turns ahead. We’ll give you updates as other GH news comes in. Stick with the ABC soap and don’t forget to check CDL often for the latest General Hospital spoilers, updates and news.