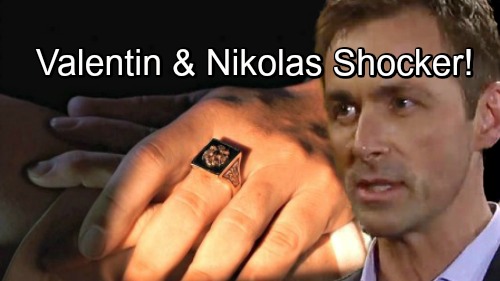 General Hospital (GH) spoilers reveal that fans are buzzing about a new Cassadine story. This one was teased a few months ago, but viewers feared that GH might’ve dropped it. Instead, it seems they just put it on hold and concentrated on some other hot plots. They had a lot of Nelle (Chloe Lanier) drama to cover before the baby swap, so that was the focus for a while.

Of course, there are still plenty of storylines to juggle. Port Charles is always full of secrets and shockers, so the Cassadine plot may not move too fast. However, it’s clear that General Hospital is taking steps toward something big. Let’s look at some recent hints and try to figure out where things are headed.

For starters, we should talk about Alexis’ (Nancy Lee Grahn) latest discovery. Sam (Kelly Monaco) noticed Alexis was wearing her mother’s watch, which she hadn’t done in a while. Alexis admitted that it broke, so she had it fixed. Despite assurance that it was working properly, it stopped again at the exact same time.

GH let us know that 10:10 is significant, so that should play into the story somehow. Some viewers are wondering if the date 10-10 could be important as well. After all, Alexis mentioned this mere days before October 10. Since there was a recent preemption, that means we’d have to adjust the date to Thursday’s new GH episode, October 11.

Could General Hospital drop a Cassadine bomb in that episode? It’s a possibility to consider. Even if GH holds off on major revelations, the meaning of 10:10 will be explained sooner or later. There are several ways the show could go with all this. Some fans are wondering if the Cassadine conundrum box will come back into play. There could be some buried secrets left to uncover.

We should also mention the clues in Laura (Genie Francis) and Valentin’s (James Patrick Stuart) confrontation. Valentin pointed out that Nikolas (last played by Nick Stabile) could still be alive. He was adamant that there was no proof of Nik’s death. That could’ve been about more than just shutting down Laura’s outburst. GH might be gearing up for Nikolas’ triumphant return!

There’s been buzz about a potential Nik recast for a while now. Plus, General Hospital spoilers say Laura has another huge storyline coming up. Her comeback will involve more than just the Kevin (Jon Lindstrom) and Ryan (Jon Lindstrom) chaos. Perhaps finding her presumed dead son could distract Laura from finding her trapped husband!

A man with a Cassadine ring kidnapped Cassandra (Jessica Tuck), so that’s another angle to play around with. Was that Nikolas or another Cassadine – GH certainly implied that it was a surprising Cassadine. Could Stefan (Stephen Nichols) be brought back in the mix, too?