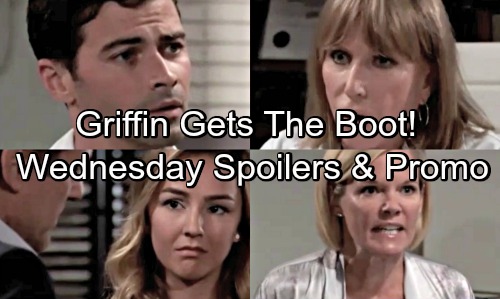 General Hospital (GH) spoilers for Wednesday, August 15, tease that Alexis (Nancy Lee Grahn) will have a couple reasons to celebrate. For starters, she just won Kiki’s (Hayley Erin) court case. Sam (Kelly Monaco) and Molly (Haley Pullos) will congratulate their mom for pulling off a win, but Alexis will note that justice came at a price. Now Kiki’s (Hayley Erin) got plenty of mama drama to deal with!

Before we get to that showdown, we should mention the other cause for celebration. Kristina (Lexi Ainsworth) will arrive back in town! It looks like Molly will have some sort of baked treat, so maybe the girls will catch up over dessert. However, Kristina will probably drop by Sonny’s (Maurice Benard) place first. She’ll want to express sympathy over Michael’s (Chad Duell) difficult situation.

Sonny will appreciate the gesture and point out that the family needs Kristina right now. He may push Kristina to stick around for a while and offer support. Elsewhere, Kiki will face Ava’s (Maura West) fury. She’ll apologize for sleeping with Griffin (Matt Cohen) and explain the circumstances, but Ava won’t care about her excuses. General Hospital spoilers say she’ll angrily demand to know what the sex was like.

Kiki will definitely regret her actions, but perhaps not as much as Griffin. Thanks to Ava’s vengeful move, Griffin will be suspended from any and all duties at GH. Monica (Leslie Charleson) will give Dr. Munro the bad news, so he’ll have to accept the consequences of that illegal paternity test.

At Charlie’s Pub, Kim (Tamara Braun) and Julian (William DeVry) will have an important discussion. General Hospital fans know that Kim wants Julian to stay on the straight and narrow. She knows all about his criminal history, but she was willing to give him a clean slate.

Of course, Julian has to keep his end of the bargain. Kim will do her best to make sure Julian keeps his hands clean in Wednesday’s new GH episode, August 15. She’ll do something to prevent a slipup and suggest that it was for his own good. Something tells us it won’t be long until Julian lands in some trouble anyway!

Other General Hospital spoilers say Liz (Rebecca Herbst) will have a chat with Carly (Laura Wright). She’ll mention Cameron’s (William Lipton) recent run-in with law enforcement and drop a hint about Josslyn (Eden McCoy). Carly will wonder if Joss was caught shoplifting, which wasn’t the case. Still, Liz may be concerned that Cam will lead Josslyn down that road or involved her somehow.

Josslyn indeed did some stealing before the earbud incident, so she’s got something to hide. Will she crack under the pressure when Carly ultimately confronts her? We’ll give you updates as other GH details emerge. Stick with the ABC soap and don’t forget to check CDL often for the latest General Hospital spoilers, updates and news.