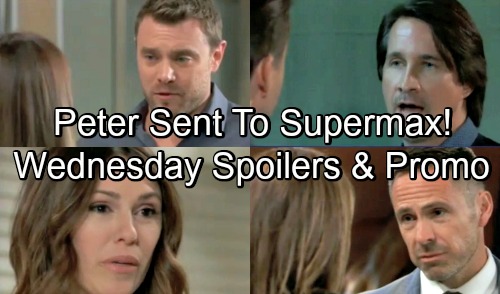 General Hospital (GH) spoilers for Wednesday, August 8, tease that Valentin (James Patrick Stuart) will try his luck with Nina (Michelle Stafford) again. He’ll make another play for her heart, but she won’t appreciate it. Nina will call Valentin out on his manipulation and reiterate that a reunion isn’t happening. She’ll want Valentin to put the idea out of his mind, but he may not give up just yet.

At GH, Drew (Billy Miller) will have a chat with Kim (Tamara Braun). She’ll notice that he seems off, so he’ll admit he’s feeling in over his head. Will Drew bring up his recent encounters with Margaux (Elizabeth Hendrickson) and her apparent interest in him? This could be awkward since Kim is Drew’s former flame, but that also makes her a good person to turn to for advice.

Drew will also do some eavesdropping in Wednesday’s new GH episode, August 8. What will he overhear and how will it affect what’s next? It’s possible Drew will learn something Margaux-related. She’s been forced to eat crow when it comes to Nelle (Chloe Lanier) and the baby blanket drama.

Other General Hospital spoilers say Finn (Michael Easton) will play hardball. At an undisclosed location, he’ll demand proof that Anna’s (Finola Hughes) alive. The kidnapper’s minion may argue that Finn’s in no position to negotiate, but the doc will stand his ground. Since we know Anna will appear in some scenes this week, perhaps Finn will indeed get a glimpse of her.

In the courtroom, Alexis (Nancy Lee Grahn) will be ready to rumble. Julian (William deVry) will be there to support Kiki (Hayley Erin), but he’ll also give his ex a pep talk. He’ll insist that Kiki’s really fortunate to have Alexis in her corner.

Kiki will continue to be a big ball of nerves, but Ava (Maura West) will remind her daughter of the ultimate goal. She’ll declare that today is about bringing that predator down. Ava will promise that Dr. Bensch (James DePaiva) isn’t going to get away with his actions. However, a twist could make that promise difficult to keep.

General Hospital spoilers say Scott (Kin Shriner) will turn to Franco (Roger Howarth) for help. He’ll talk about the tough task he’s facing, which involves throwing the case without tipping Dr. Bensch off. Of course, Scott will be most concerned about the secret he’s keeping from the doc and everyone else. He’ll eventually decide to tell Franco about Kiki and Griffin’s (Matt Cohen) scandalous hookup.

Scott will push Franco to dash off and fill Alexis in ASAP. GH fans can expect Franco to try, but will he succeed? General Hospital spoilers say Franco will somehow make a mess of things, so it sounds like Alexis will remain at a disadvantage.

Back at GH, Peter (Wes Ramsey) will freak over Robert’s (Tristan Rogers) news. He’ll learn he’s set to head off to supermax, so he’ll have to rev up his freedom efforts. Peter will do everything he can to avoid prison. He may give Robert a little taste of the Patients 1-5 info he mentioned.

It looks like more Port Charles chaos is ahead. We’ll give you updates as other GH details emerge. Stay tuned to the ABC soap an don’t forget to check CDL often for the latest General Hospital spoilers, updates and news.